Gary Bowyer will be in charge of the Ammies, their third manager of the campaign following Graham Alexander and latterly Richie Wellens.

Ian Evatt: “They’re unbeaten at home all season, so it’s going to be a tough game, there are no two ways about it.

“They are definitely trying to get into that top seven and rightly so with what they spend and the players they’ve got at the football club.

"But for us, it’s about what we do and we’ll go there and try and implement the game plan, try and take the game to them.

"The pleasing thing for me moving forwards is every game we look at now from now until the end of the season, probably other than the last game, there’s going to be something at stake and teams are either trying to make the play-offs, trying to stave off relegation or get promoted themselves, so I think it’ll be a good game.”

Wanderers’ supporters can watch the game against Salford City by purchasing an iFollow BWFC video match pass for just £10 - you don’t have to miss a kick.

Wanderers have no new fitness concerns heading into the game with Evatt revealing that captain Antoni Sarcevic is making excellent progress on his return to fitness.

However, the Wanderers boss will not rush the midfielder back and will be guided by the physios before naming him in a squad over the remaining weeks of the season.

Dennis Politic is progressing well with his rehab whilst Liam Edwards has picked up a slight calf strain during his rehab process.

Wanderers' victory at the weekend saw them bounce back to winning ways after a draw (Colchester) and rare defeat (Newport County) as they leapfrogged Tranmere Rovers into third spot of the Sky Bet League Two table.

Salford are unbeaten at home all season and will be looking to make a surge into the play-offs.

They are currently occupying ninth spot and are on 58 points, nine behind Wanderers. They have won their last two fixtures - managing to earn victories against Forest Green Rovers and Stevenage.

An Eoin Doyle strike and an own-goal by Jordan Turnbull made it a night to remember as Ian Evatt’s men turned on the style in front of the Sky Sports cameras to beat Salford City 2-0 at the University of Bolton Stadium earlier in the season.

Wanderers handed a debut to Matt Gilks in between the sticks and were excellent value for their victory which kickstarted an excellent run of form. 
This afternoon's scheduled Sky Bet League Two fixture against Salford City at the Peninsula Stadium has been postponed due to a waterlogged pitch.

The three points though solidified their place amongest the automatic promotion berths as they opened a four-point gap ahead of Morecambe who jumped ahead of Tranmere Rovers into fourth.
​​
​​Wanderers could have been out of sight in a one-sided first half and showed their defensive brilliance in the second period.
​​
​​Ian Evatt made just one change from the side that beat Harrogate Town at the weekend.
​​
​​George Thomason came in for Marcus Maddison while Ryan Delaney returned to the bench.
​​
​​Matt Gilks comfortably gathered Ian Henderson’s scuffed volley from Robbie Gotts’ centre as the Ammies had the first opportunity of the evening.
​​
​​At the other end, Vaclav Hladky blocked Eoin Doyle’s follow-up when he initially got a fist to Dapo Afolayan’s drive.
​​
​​Seconds later and the ball somehow evaded Doyle’s head following Lloyd Isgrove’s right-sided cross.
​​
​​Doyle was close to breaking the deadlock as Wanderers broke upfield. The Irishman was unable to get enough power on Gethin Jones’ cross to trouble Hladky.
​​
​​The Czech keeper pulled off a strong save to keep out Doyle once again after Afolayan located the Wanderers top scorer.
​​
​​Wanderers were firmly on top and Afolayan’s shot from range went just over the bar.
​​
​​Tom Clarke had his name taken for a late challenge on Afolayan with the two getting into a good battle on the left-hand side.
​​
​​From the resulting free-kick, the ball worked its way to Isgrove and the winger broke the deadlock cutting in with his left foot to curl the ball beyond Hladky.
​​
​​Henderson spurned a glorious chance to equalise shortly afterwards when he blazed the ball over the bar after latching onto Brandon Thomas-Asante's through pass.
​​​
​​Clarke headed downwards and wide from Ibou Touray’s cross as the half edged towards its end.
​​
​​Richie Towell forced a diving save from Gilks with a volley from just inside the box.
​​
​​MJ Williams was cautioned for a foul on Coutts despite the referee initially awarding the foul in Wanderers’ favour.
​​
​​The hosts came out of the traps quickly in the second half as they searched for a way back into the game, but Wanderers’ defence held firm.
​​
​​Henderson was again wasteful from a Touray cross when he headed well wide of goal,
​​
​​At the other end, Wanderers earned a corner when Kieran Lee’s shot after George Thomason won the ball in midfield deflected behind.
​​
​​Doyle fired over when he was put through by Thomason as Wanderers broke forward and pressed the hosts.
​​​
​​Evatt made a double change on 76 minutes when he brought on Shaun Miller and Nathan Delfouneso for Doyle and Afolayan.
​​
​​With six minutes remaining, Zack Elbouzedi replaced the hard-working Isgrove.
​​
​​Wanderers defended doggedly and deserved to pick up the three points that consolidated their place in the automatic promotion places.
​​
​​
Salford City:
Hladky, Clarke (Bernard 46), Eastham, Turnbull, Touray, Towell (Burgess 72), Coutts (Hunter 46), Lowe, Gotts, Thomas-Asante, Henderson.​
Subs Nots Used: Evans, James, Boyd, Dieseruvwe.​
​​​
​​​​​​​​​
​​Bolton Wanderers:
​​
​​Gilks, Jones, Almeida Santos, Baptiste, John, Williams, Lee, Isgrove (Elbouzedi 84), Thomason, Afolayan (Delfouneso 76), Doyle (Miller 77).
​​
​​Subs Not Used: Delaney, Brockbank, Tutte, Gnahoua.
Goal: Isgrove (23)


This afternoon's scheduled Sky Bet League Two fixture against Salford City at the Peninsula Stadium has been postponed due to a waterlogged pitch. 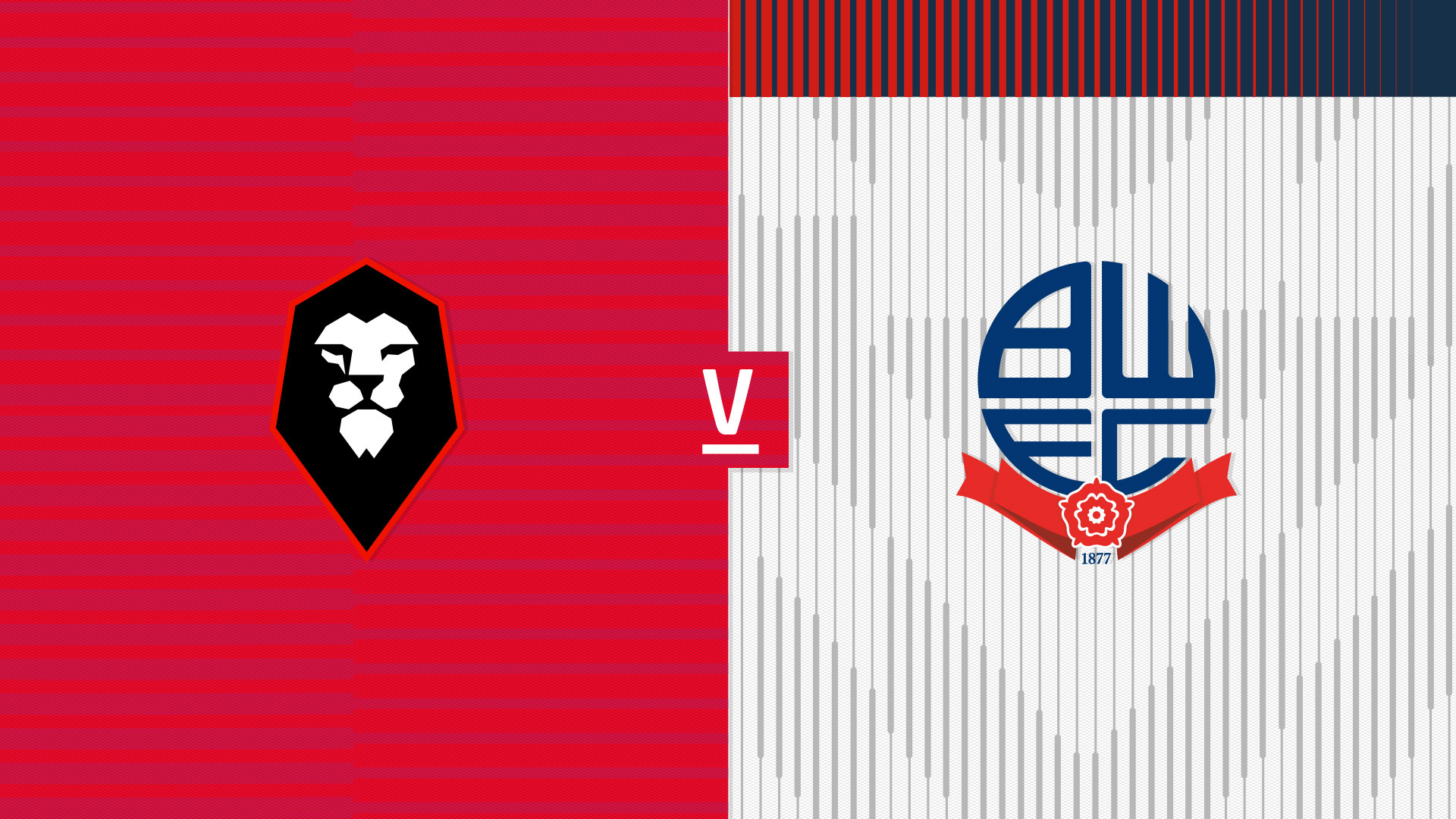 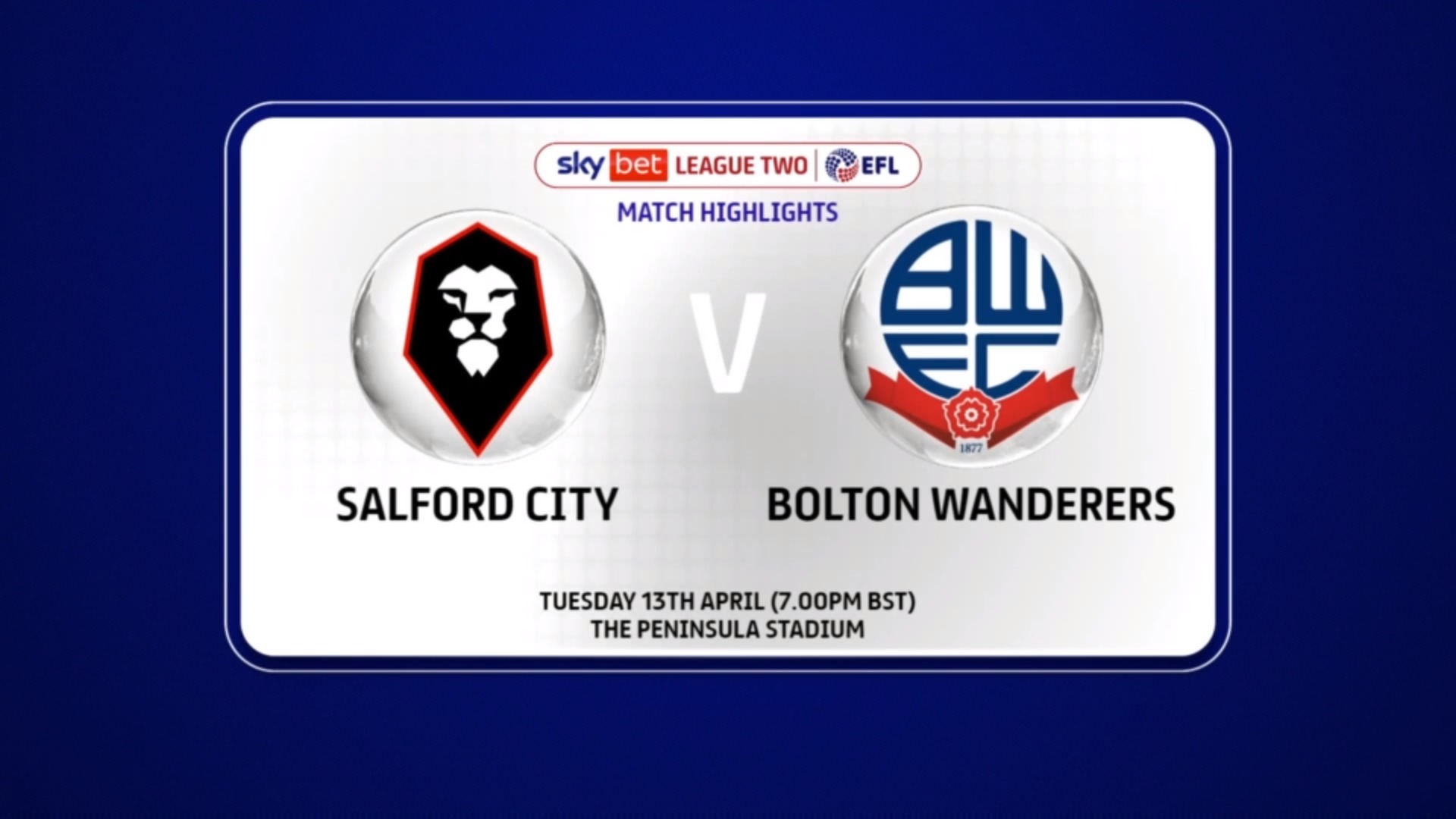 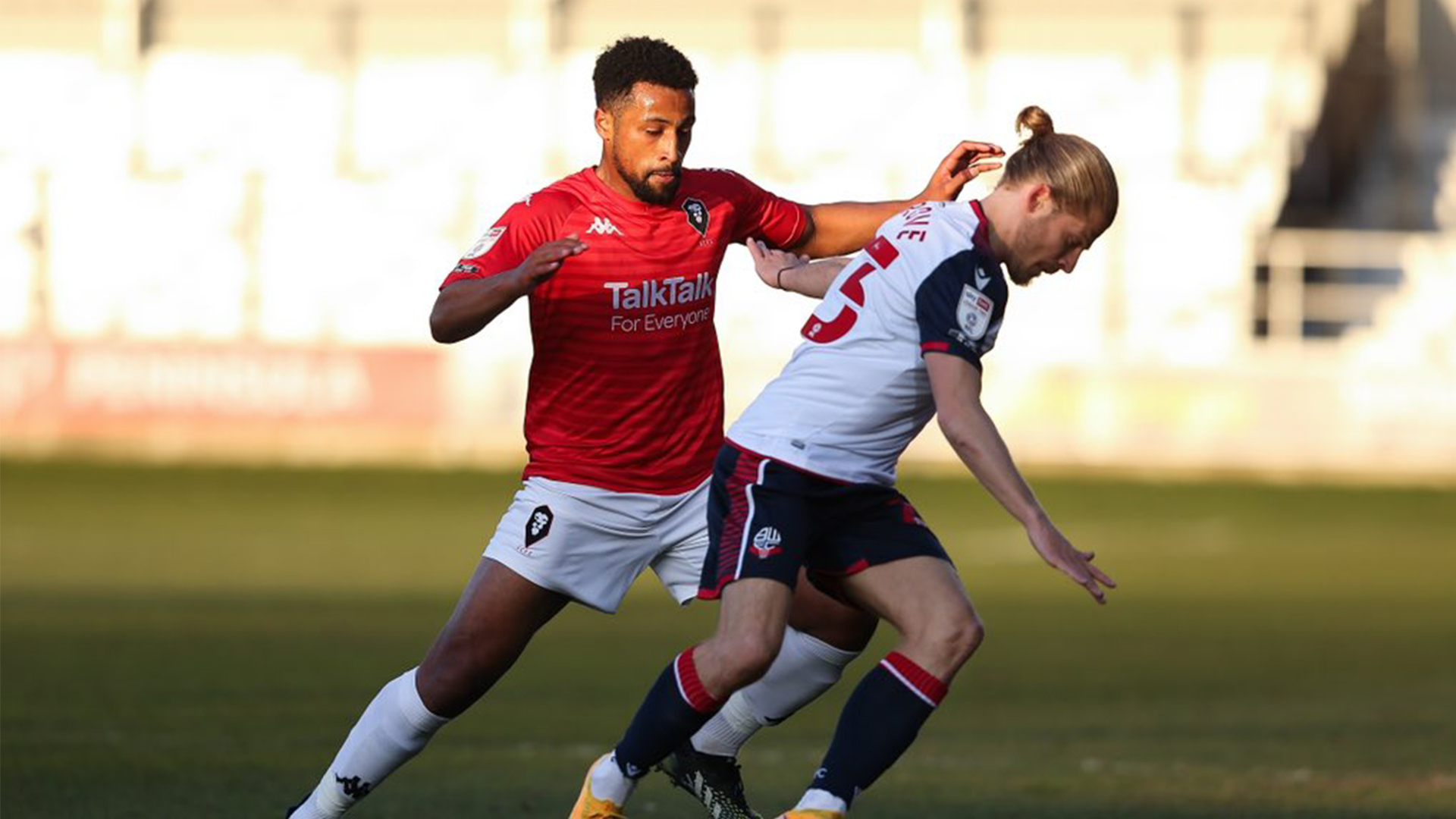