Wanderers host Port Vale at the University of Bolton Stadium in Sky Bet League Two as they go in search of a sixth successive win in all competitions.

Ian Evatt: “It’s a cliche but it’s all about the next game. Things change quickly in football.

“People look at Port Vale’s form and our form and think it’s a given. It’s certainly not a given and we have to be bang at it again on Saturday.

“We’ll focus on ourselves primarily. If we do what we can do to the ability that we can do then I’ve got every faith that we’ll get three points.”

John Askey: “Bolton have got decent players so it was only a matter of time before they started to win games and be in the top half, we’d expect them to be up there at the end of the season.”

Wanderers supporters can watch the game against Port Vale by purchasing an iFollow BWFC video match pass for just £10.

Wanderers will be without midfielder Andrew Tutte and striker Shaun Miller who are both nursing thigh injuries. Tutte is expected to be out for 3-4 weeks, whilst Miller is likely to be sidelined until March.

Harry Brockbank has stepped up his return from injury and is back training, although this weekend's game could come early for the Wanderers defender.

In the Port Vale camp, David Amoo and Danny Whitehead will both sit out the game after picking knocks since Vale’s last encounter.

Wanderers’ comfortable 3-0 victory against Southend United last weekend brought their winning sequence to five consecutive games in all competitions - the first time the club has had a run of such length since the 2016/17 season.

In contrast, after a positive start to the season Vale have lost their last five games and go in search of their first ever league away win at the University of Bolton Stadium.

Wanderers raced to a three-goal lead inside 16 minutes the last time they hosted Port Vale.

Goals from Zach Clough, Josh Vela and Lawrie Wilson saw the Whites pick up a 3-1 victory against the Potteries outfit back in October 2016.

Wanderers followed this up with a 2-0 win in the reverse fixture later in the campaign, a result that moved Phil Parkinson's side on the verge of promotion back to the Championship.

Bolton Wanderers recent winning streak came to a halt as they suffered a heavy defeat against Port Vale at the University of Bolton Stadium.

Although the hosts managed to find the back of the net through Gethin Jones, Eoin Doyle and Lloyd Isgrove, Vale were always in control thanks to their bright start.

Ian Evatt made just one change to his side with young midfielder George Thomason making his first Football League start at the expense of the injured Andrew Tutte.

The visitors took an early lead through Manny Oyeleke who fired home from close range past Matt Gilks.

The Wanderers keeper was on hand to make two smart saves to prevent the visitors from going further ahead.

First he kept out a powerful drive from David Worrall before tipping over Cristian Montano’s strike from distance.

He couldn’t do anything about Nathan Smith’s bullet header after nine minutes as Vale raced into an early two-goal lead.

Jones showed excellent control to connect with the striker’s pass but his initial effort was blocked. The ball broke to him again and he displayed excellent composure to curl in a beautiful right footer.

Eoin Doyle fired over from distance after Jones’ cross was deflected into his path. At this stage, Wanderers were right back in the contest and were creating chances.

Peter Kioso’s cross from the right hand side after some good work by Antoni Sarcevic was headed over by Doyle. Ian Evatt's men looked the likeliest of the two teams to score the next goal.

At the other end, Gilks made himself big to beat away Montano’s drive after Vale broke into the Wanderers box.

Another great passage of play saw Kioso ping in a beautiful ball into the box only for Leon Legge to clear it off his own line with Doyle lurking at the far post.

Thomason had initially provided in inch-perfect cross field pass to find Doyle in the build-up.

Doyle’s shot from distance after latching onto a Delfouneso knock-down was tipped over the bar for a corner by Scott Brown shortly afterwards.

Another cross from Kioso over on the right found Delfouneso on the penalty spot, but he was unable to keep his headed effort down and another chance went begging for the hosts.

Carl Boyeson awarded Vale a penalty just before the break when he adjudged Ricardo Almeida Santos to have fouled Devante Rodney.

Tom Conlon made no mistake from the spot, sending Gilks the wrong way to fire into the roof of the net.

The visitors extended their lead with a fourth strike less than a minute after the restart when Montano raced clear to chip the ball over Gilks.

Matters got worse when David Worrall added a fifth with a shot that flew into the bottom right hand corner.

Nathan Smith added his name to the tally with Vale’s sixth, with just under half an hour remaining.

Doyle pulled a goal back for Wanderers shortly afterwards with a low drive from distance for his seventh goal of the season.

Sarcevic was looking to get a third for Wanderers but saw his shot blocked brilliant by Luke Joyce.

Isgrove came on for an impressive cameo and he reduced the arrears with a volley into the roof of the net after Vale failed to clear Jones’ initial effort.

Wanderers made their final change when Tom White came on for Sarcevic with just over ten minutes to go.

Kioso looped the ball over Brown and into the net after Comley looped into the danger area but his effort was ruled out for offside.

White hit the cross bar from 25 yards late on after being teed up by Isgrove as Wanderers still battled to reduce the deficit before the final whistle. 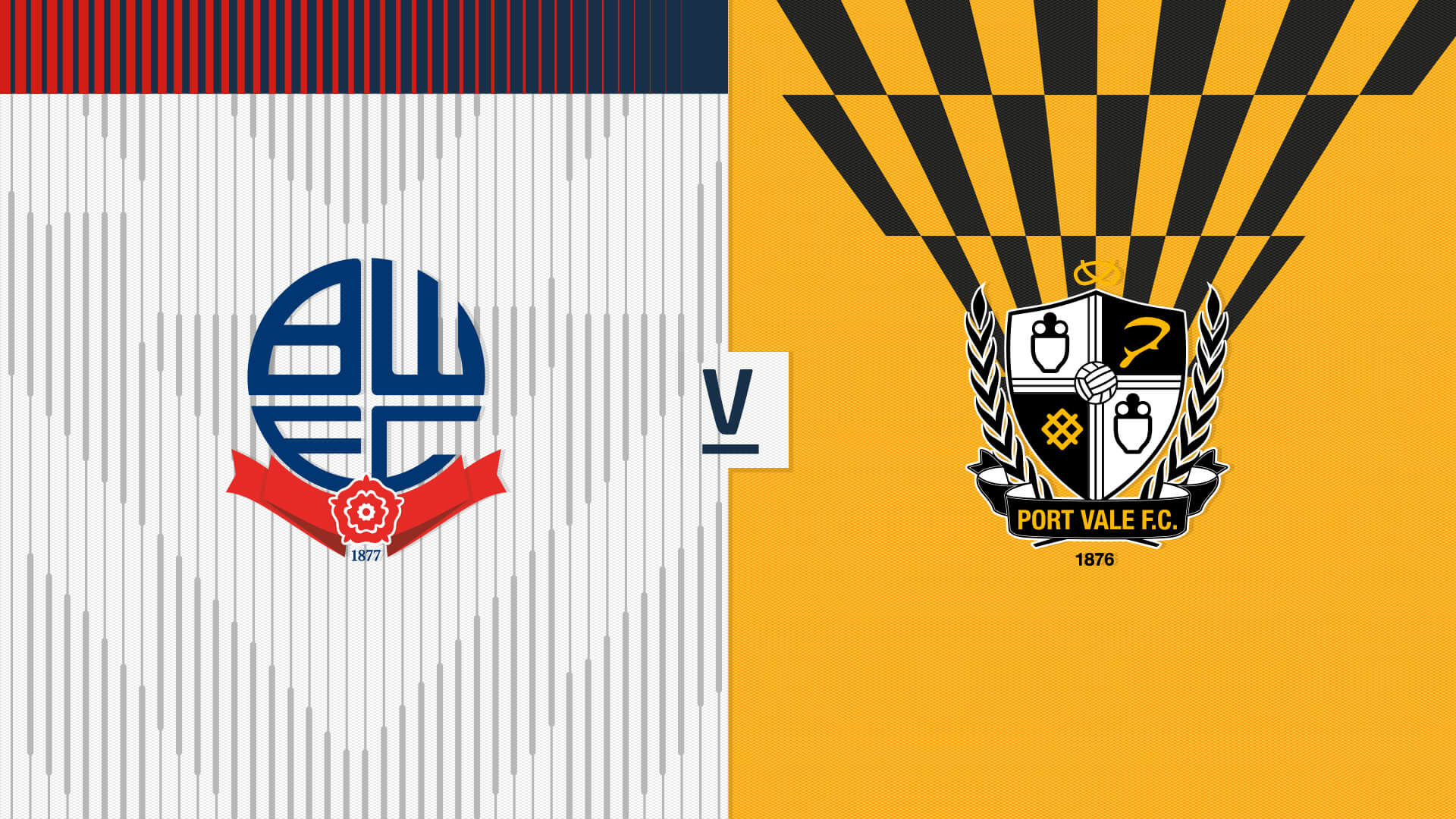 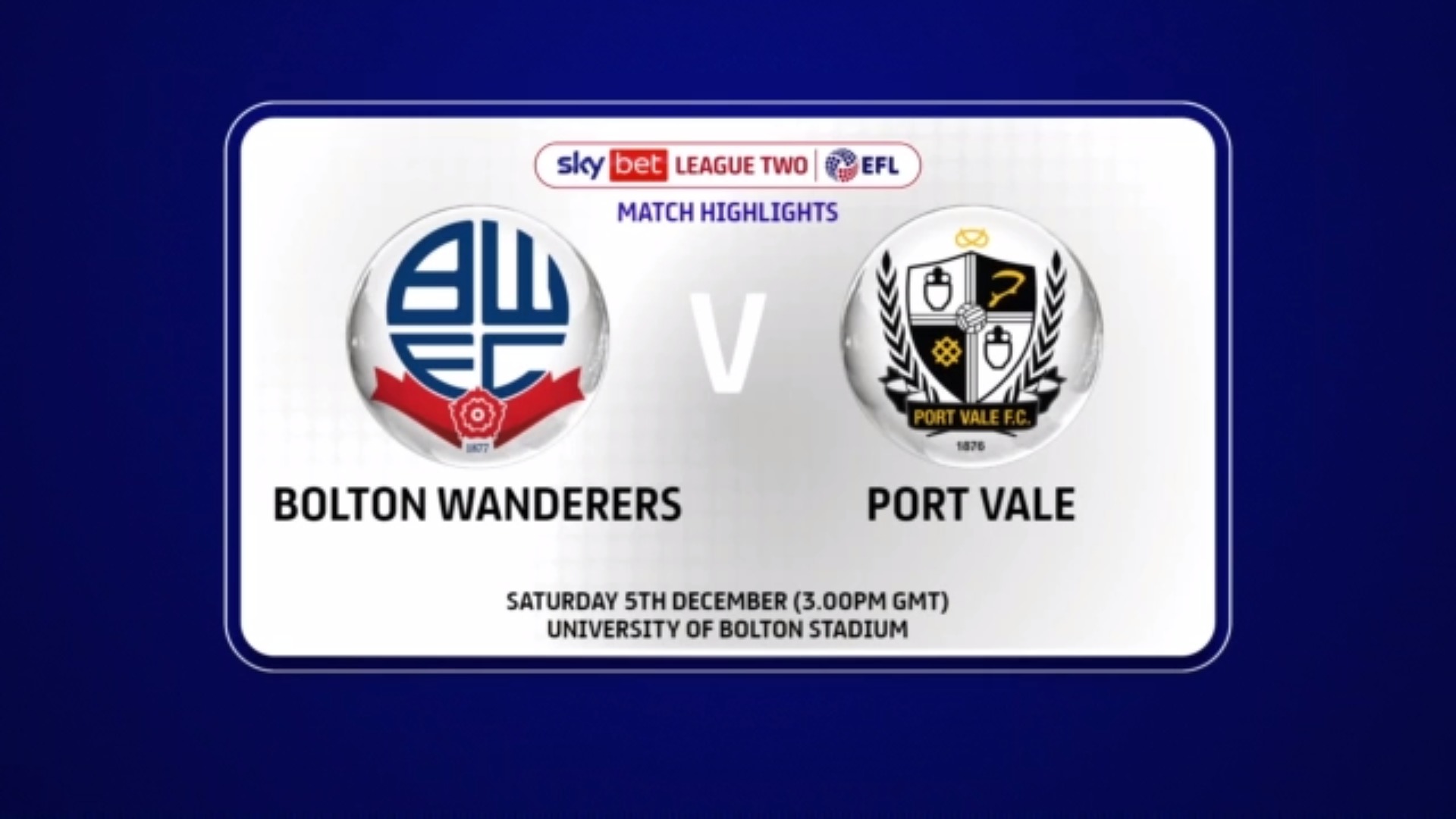 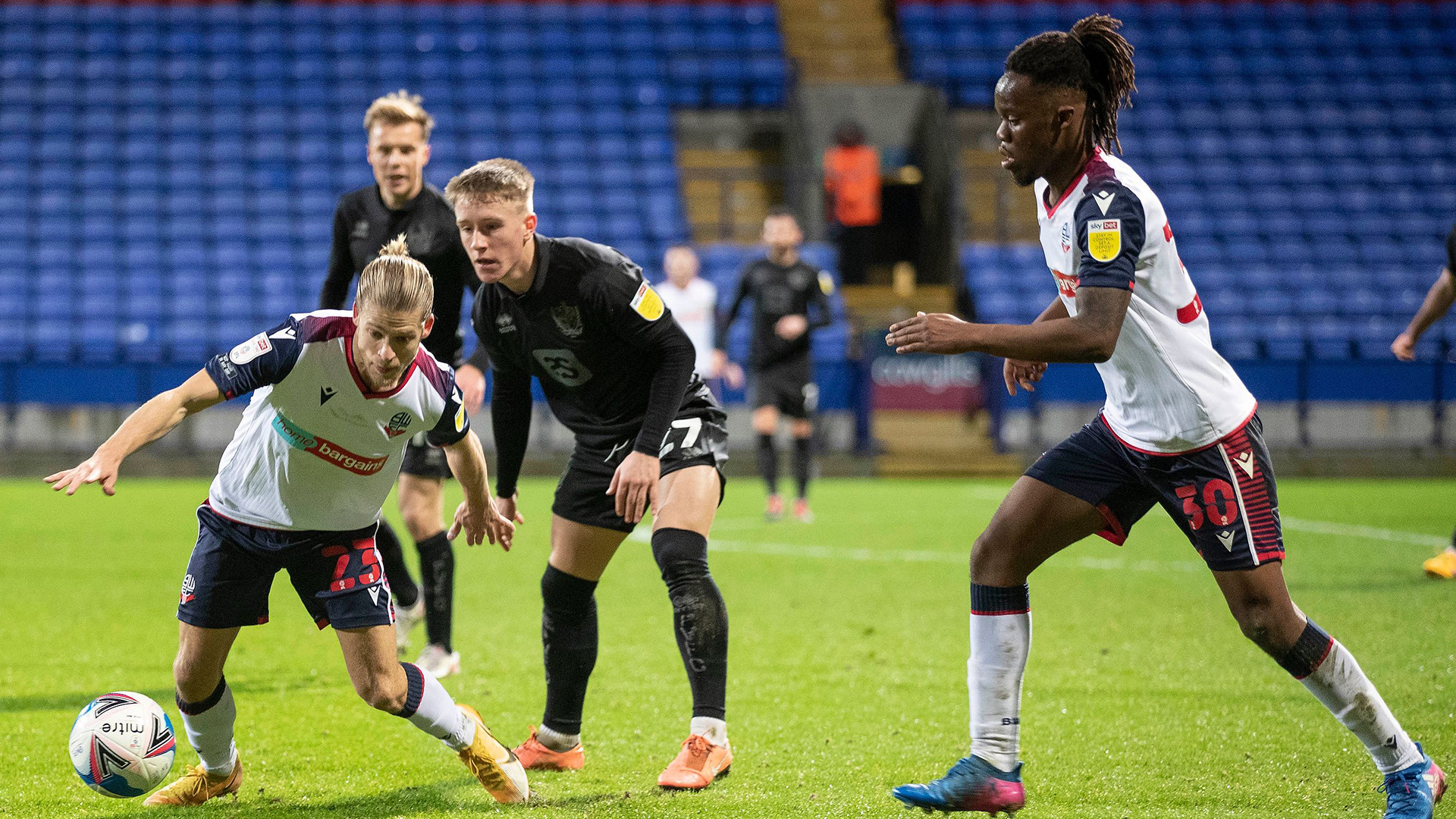