Wanderers are back on the road tomorrow with a trip to the Midlands to face Walsall at the Banks's Stadium in Sky Bet League Two.

Ian Evatt: "We’re treating last week as a one off and an an anomaly and we’re going forward into the rest of December with the good work that we put in during November."

'We’ve got some good tests and some good games to look forward to and hopefully we’ll play like we did in November and not like we did on Saturday."

Darrell Clarke: "They’ve got experience in there – Sarcevic, Doyle, Santos at the back and Gilks in goal."

"They’ve got a lot of experience and a mixture of younger players which will probably be the balance of most squads in League Two but the name’s a big name in League Two. A team that was formerly a Premier League club that is fighting hard to get back up the pyramid."

Wanderers supporters can watch the game against Walsall by purchasing an iFollow BWFC video match pass for just £10.

Harry Brockbank is nearing a return to action but isn't likely to be involved at Walsall. Likewise with Andrew Tutte; he's progressing well with his recovery but won't be fit for Saturday.

Dennis Politic and Liam Edwards remain on the sidelines with long-term injuries.

In the Walsall camp, attacker Josh Gordon recently returned from a medial knee injury and could be in contention to start on Saturday.

Former Wanderers loanee Danny Guthrie is likely to be involved whilst fellow midfielder George Nurse hasn't been involved since late October and is expected to miss out.

Wanderers' run of five consecutive victories came to an end with a bizarre 6-3 home defeat to Port Vale last weekend but haven't tasted defeat on the road since a 4-0 loss to Leyton Orient on Halloween.

Ian Evatt's men have recorded back-to-back away victories from their last two fixture on the road at Stevenage and Scunthorpe United.

A run of four losses in a row for Walsall came to an end with a draw at Newport County and they're now three without defeat following a draw with Stevenage and an away victory at Tranmere Rovers last weekend.

The last two encounters between the two sides have produced 12 goals. Wanderers met Walsall at the University of Bolton Stadium in an FA Cup 3rd Round tie in January 2019. A Josh Magennis hat-trick helped to secure progress to the next stage.

The last league encounter was also in BL6 and Phil Parkinson's Wanderers registered a 4-1 victory in February 2017 thanks to goals from Gary Madine, Liam Trotter, Chris Long and a James O'Connor own-goal.

September 2016 was the last time the two sides met at the Banks's Stadium and a Jason McCarthy effort secured a 1-0 victory for the Saddlers on that afternoon.

Bolton Wanderers suffered a narrow defeat in the West Midlands as Walsall came from behind to claim the victory.

Wanderers got off to a great start courtesy of Eoin Doyle’s eighth goal of the season and could have extended their lead on several occasions during a dominant first half display.
But goals from Elijah Adebayo and Rory Holden ensured the hosts picked up the points.
Ian Evatt named an unchanged starting XI from the side that suffered defeat against Port Vale a week earlier.
The hosts started with some slick movement in midfield and Wes McDonald wasn't too far away with a right footer from distance that went just wide.
At the other end, a good passage of play involving George Thomason and Nathan Delfouneso culminated with Peter Kioso’s centre falling into the hands of Jack Rose.
Wanderers took their lead after 13 minutes courtesy of Doyle’s eighth goal of the season. The Irishman was at the far post to guide Delfouneso’s cross over the line after Ali Crawford drove forward.
The goal took the sting out of Walsall’s earlier promise with Wanderers not being placed under any significant pressure.
Another McDonald curler from distance went wide but that was all they and to show as an attacking force in the opening half an hour.
Delfouneso headed over from Doyle’s right sided cross as Wanderers looked to increase their lead.
Wanderers enjoyed a good spell of possession with some positive and slick passing. Delfouneso did well to carve open a shooting chance but his shoot went high over Rose’s cross bar.
The visitors had a let off five minutes before the break when Zak Jules rose high to head wide from a corner.
The linesman's flag thwarted Delfouneso from putting Wanderers further in front when he converted Kioso’s low cross after Thomason’s pass sliced open the Saddlers’ defence.
Just a minute before the break, and Walsall equalised through Adebayo.
No changes were made during the break and Wanderers started brightly.
Crawford’s free-kick presented Wanderers with good opportunity to restore their lead but his effort went straight into the Walsall wall.
Walsall began to get a hold of proceedings and Rory Holden should have but his side on front but he steered a low ball wide at the near post after Wanderers allowed the ball to be crossed in.
Holden made amends moments later when he thundered a drive beyond Gilks following a short free kick that was rolled into his path 20 yards from goal.
Wanderers almost equalised moments later when Sarcevic’s acrobatic effort was deflected onto the post by a Walsall defender at the expense of a corner.
Gilks made a stunning save to prevent the hosts from extending their lead through Adebayo.
Wanderers then broke with pace but Kioso wasn't able to get a decent connection on Crawford’s centre.
Evatt made his first change with just over ten minutes remaining with Arthur Gnahoua coming on for Crawford.
But he was taken off less than minute later after appearing to pick up a shoulder injury with Ronan Darcy coming on on his place.
Wanderers were unable to get on the scoresheet and suffered their second defeat on the trot.
Walsall:
Rose, Norman, Jules, Clarke, Scarr, Kinsella, Adebayo (Lavery 90), Bates, McDonald (White 85), Holden, Osadebe (Gordon 74).
Subs Not Used: Roberts (GK), Sinclair, Guthrie, Scrimshaw.
Goals: Adebayo (44), Holden (57).
Bolton Wanderers:
Gilks, Jones, Almeida Santos, Delaney, Delfouneso, Doyle, Sarcevic, Crawford (Gnahoua 79) (Darcy 82), Thomason (White 86), Baptiste, Kioso.
Subs Not Used: Crellin, Comley, Mascoll, Greenidge,
Goals: Doyle (13). 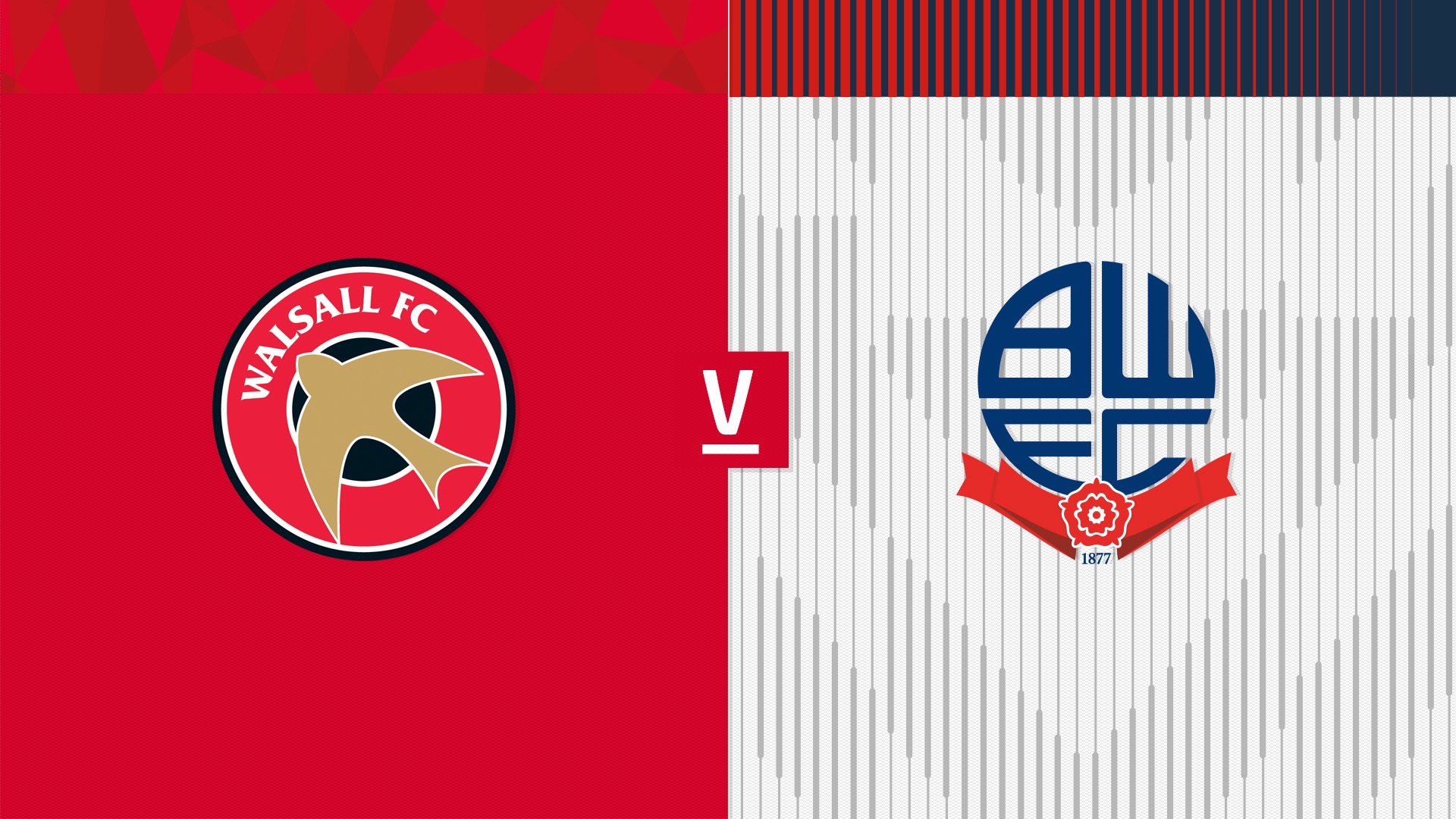 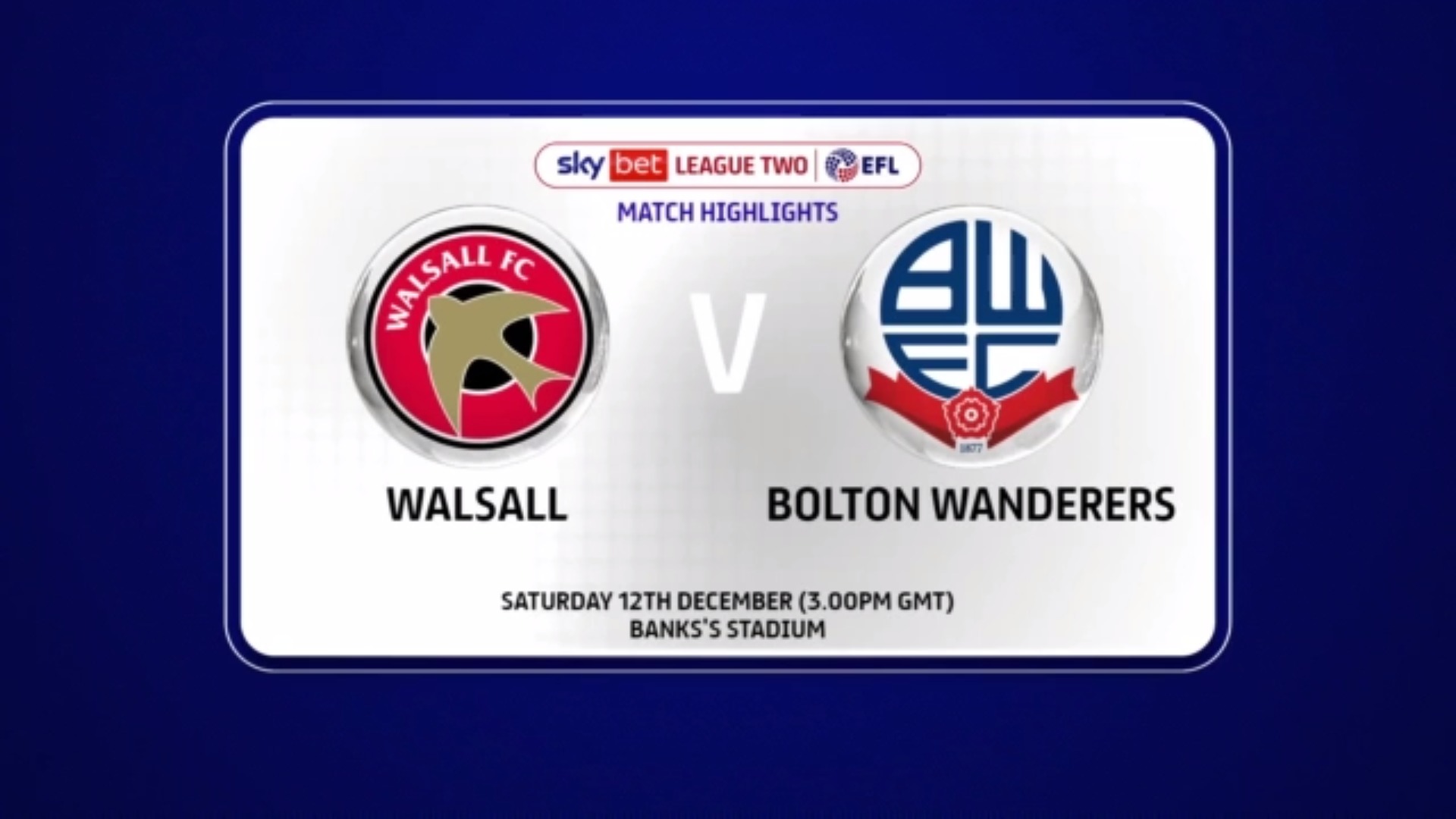 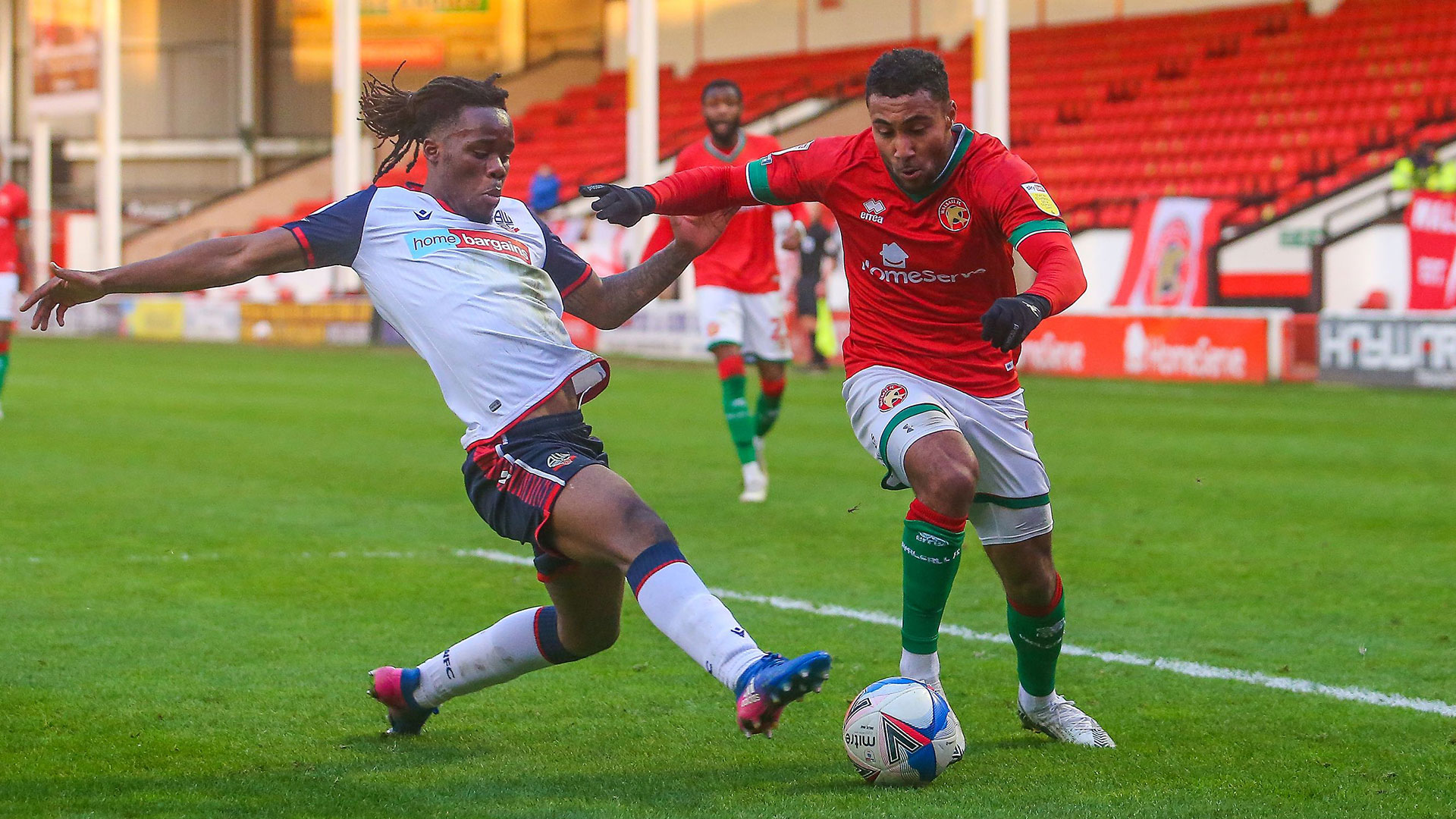