Bolton Wanderers host Walsall at the University of Bolton Stadium on Saturday as they aim to continue their excellent form which has seen them win nine and draw two of their last 11 matches.

Ian Evatt: “We’re fully focused on our own job and our own fixtures. A quarter of the season to go that’s a lot of points, we’ve got to take care of our own business and prepare for Walsall.

“I’d much rather have this pressure than what we had earlier in the season. Nothing good in life comes without pressure. We’re enjoying our work and performances. We want more and we’re determined to keep it going.

“We’re going to enjoy the pressure and keep trying to get results and then hopefully we can do enough to get this team out of this division.

“We need to treat every game like it’s a cup final. It’s an old cliche but we haven’t got time for off days, we have to be full tilt until the end of the season.”

James Clarke (Walsall captain): “Bolton is obviously a much different project, it will be a lot different and we’ll look at how they play and change the way we’re going to go about it.

“But we have to take confidence from Crawley. I’m gutted with the result but we have to look back at the game and see we’ve done some really good things and kept them very quiet.

“Some of the performances and battling was unbelievable, so we need to keep that spirit, more boys becoming men.”

Wanderers’ supporters can watch the game against Walsall by purchasing an iFollow BWFC video match pass for just £10 you don’t have to miss a kick.

Wanderers captain Antoni Sarcevic will be out of action for several weeks after picking up a hamstring injury during last weekend’s victory at Port Vale.

Otherwise, Ian Evatt has no fresh injury concerns as he aims to extend Wanderers’ unbeaten record to a 12th game.

Wanderers are currently at the summit of the Sky Bet League Two form table over the last ten games.

Nine wins and two draws during an eleven-game period have seen them pick up 29 points from a possible 33.

Meanwhile, the Saddlers were denied a much-needed victory against Crawley Town last time out when their opponents netted a 97th-minute leveller. From their last ten games, they have won one, lost five, and drawn four matches.

Walsall picked up the three points at the Banks's Stadium earlier in the season when they ran out 2-1 winners.

Wanderers took the lead through Eoin Doyle but goals from Elijah Adebayo and Rory Holden sealed the victory for the Midlanders.

A dynamic winger who is a real attacking threat for Walsall, McDonald has impressed during his time in the West Midlands following a move from Yeovil Town in July 2019 and so far this season, he has made 36 appearances (3 goals) at the time of writing.

Born in London, McDonald spent time in the youth ranks at Crystal Palace and Fulham before a move to Birmingham City in 2012 to continue his scholarship. Handed his first professional contract during his time at St. Andrew’s, the winger never made a senior appearance for the Blues and learned his trade whilst on loan at Nuneaton Town and Solihull Moors.

Making a permanent switch to Yeovil Town in August 2018, he spent a single season at Huish Park before signing for Walsall. Last season for the Saddlers, he managed 35 appearances (7 goals) before the season was cut short in March 2020.

Bolton Wanderers came from behind to pick up their tenth win in 12 games as they beat Walsall at the University of Bolton Stadium.

Sam Perry put the visitors in front with a precise strike from distance but Ian Evatt’s men dialled up the heat in the second half to run out deserved winners thanks to a header from Kieran Lee and an Eoin Doyle spot-kick, which took his tally to 15 goals for the season.

The Wanderers boss made just one enforced change with Lloyd Isgrove coming in for injured captain Antoni Sarcevic who tore his hamstring last Saturday at Port Vale.

Wanderers were on the front foot early on with Saddlers’ keeper Liam Roberts eventually holding on to a 20-yard drive from Dapo Afolayan.

The on-loan West Ham man somehow kept the ball in over on the far side and charged goalwards with his resulting shot being blocked by a Walsall defender.

Declan John’s centre was cleared at the expense of a corner after some intricate passing place set up the opportunity.

Walsall put in a decent display in the first half though, and Emmanuel Osabede’s shot on the turn was easily saved by Matt Gilks as the visitors broke forward.

The visitors took the lead after 28 minutes when Sam Perry’s shot from distance found its way past a diving Gilks.

Kieran Lee’s volley from distance flew just over the bar after the ball fell into his path following the corner kick. Wanderers were searching for a way back into the game.

Wanderers won a free-kick just outside the box when Afolayan was upended by James Clarke, who received a yellow card for the challenge. The midfielder picked himself up and took the set-piece which cannoned into the wall.

Wanderers had a great opportunity equalise moments later when Afolayan headed over from close range after meeting Gethin Jones’ inch-perfect cross from the right-hand side.

At the other end, Caolan Lavery flashed a shot wide just before the hour mark.

Liam Roberts’ tipped Declan John’s cross into the box over his bar after the ball appeared to be heading goalwards.

Another opportunity fell Wanderers' way when Ricardo Almeida Santos powered in to meet John’s corner, but the big defender was unable to keep his header on target.

Wanderers got a deserved equaliser after 68 minutes when Lee headed the ball over the line after Roberts’ kept out Jones’ deflected cross.

Walsall were then reduced to ten men for the final 17 minutes when Hayden White was shown a straight red for grabbing Afolayan around the throat.

Wanderers took the lead with ten minutes of the game remaining when Doyle slammed home his 15th goal of the campaign from the penalty spot after Lee was upended.

With five minutes of the game remaining, Arthur Gnahoua and Zack Elbouzedi came on for Afolayan and Isgrove, while Shaun Miller replaced Doyle moments after.

The hosts saw out the game comfortably to claim a victory that put them within one point of the automatic promotion places. 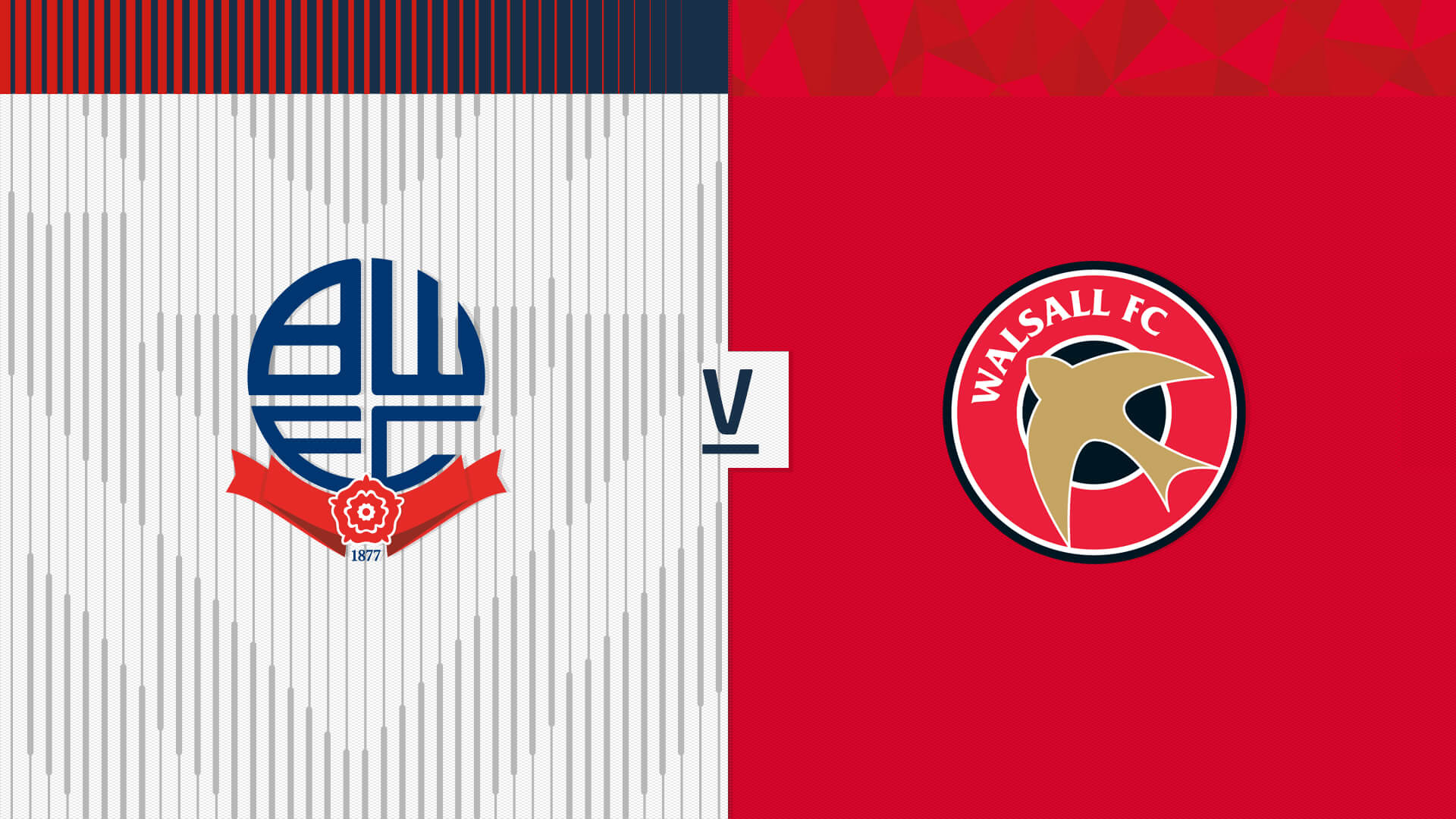 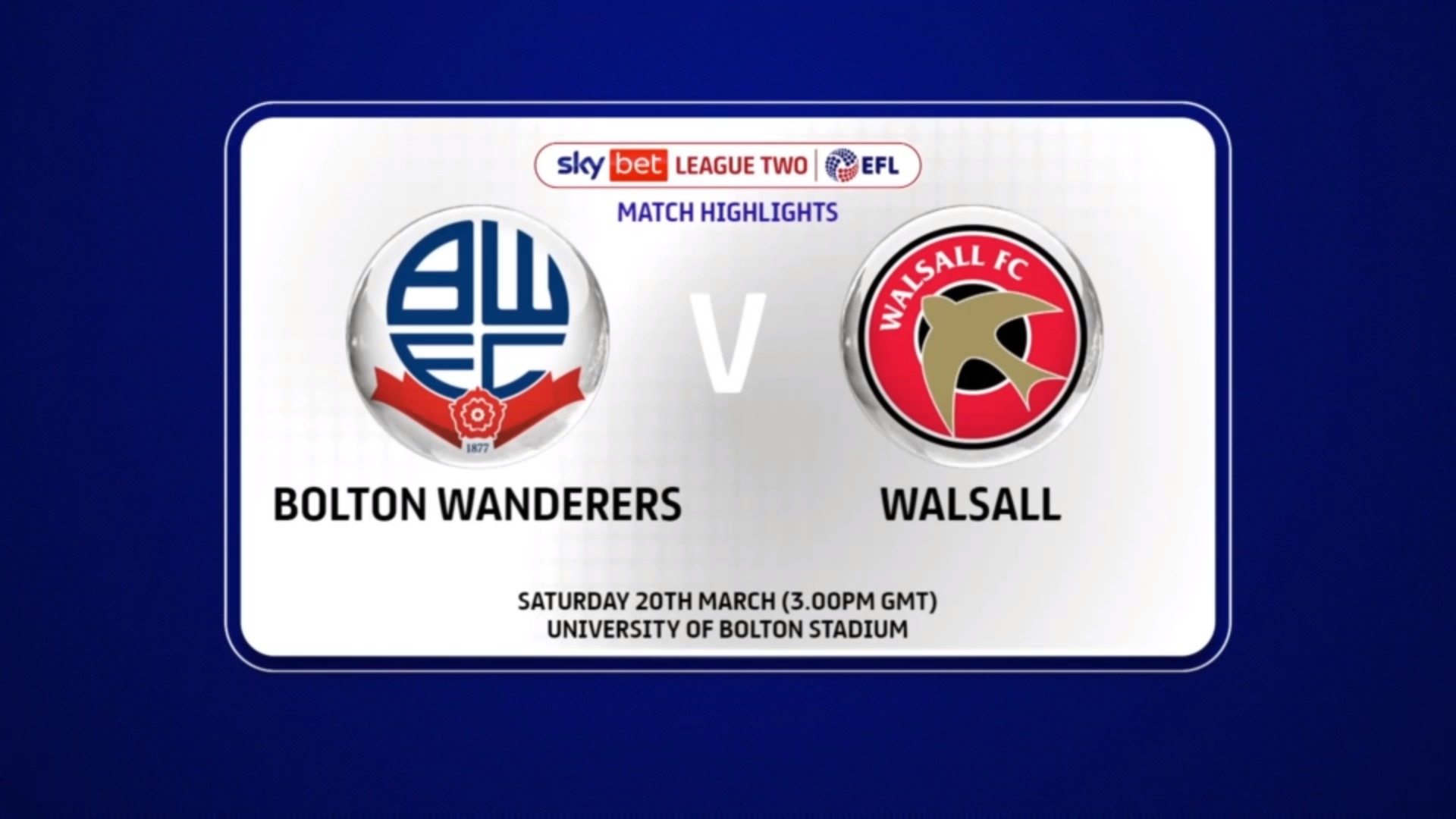 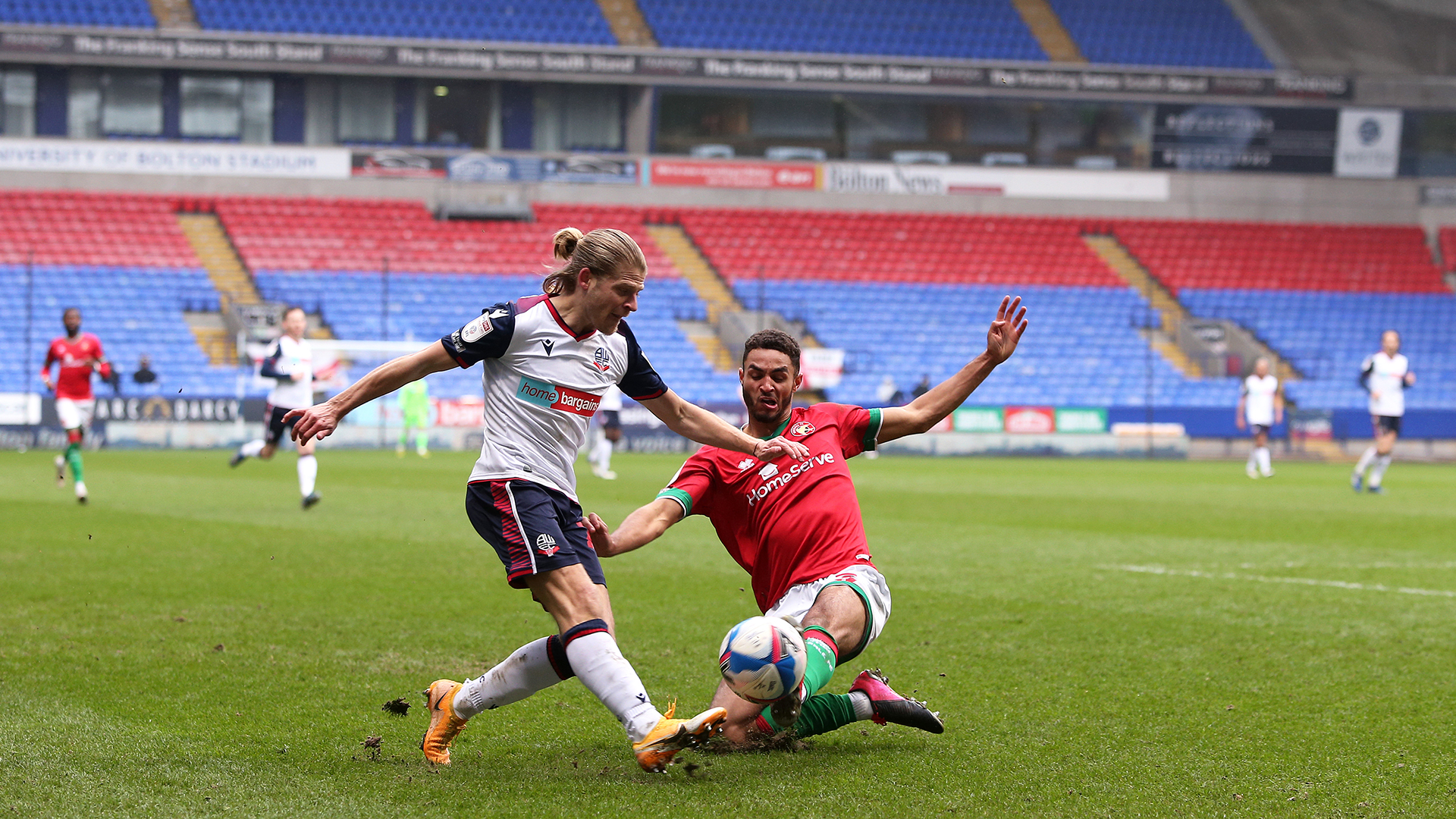