Bolton Wanderers make the short trip to Boundary Park this evening as they look to stretch their five-game winning sequence when they take on Oldham Athletic (Kick Off 7pm).

Ian Evatt: “I think they’re an attacking threat, they've got some good attacking players and they can score goals.

"They had a great result on Saturday, but we also have good attacking players and their biggest strength can also become their biggest weakness and vice-versa.

"We’d like to think that if teams open up and throw the game open against us that we’ve got the players to be able to take advantage of that. I think it’s going to be a good game and both teams will fancy it.

"We’re obviously in a good run of form but for us, I’ve said many times, it’s about what we do. If we can perform to the levels I think we’re capable of, then we have a great chance of winning every game but it’s down to us and we have to go there and do it.”

Harry Kewell: “Ian is trying to play the right way. I know people may say, ‘oh just get it up there’ and all that, but you can see in his last few results he’s started to put a run together.

“They’re coming here having won five games in a row and will be flying high.

“He’s in a strong position now and he’s going want to keep that consistency up there.

“We’ve had a little bit of inconsistency but we’re coming off a good win and I feel tomorrow night is going to be a good footballing game, an exciting game.”

Wanderers’ supporters can watch the game against Oldham Athletic by purchasing an iFollow BWFC video match pass for just £10 you don’t have to miss a kick.

Marcus Maddison will be back in contention after missing Saturday’s victory against Barrow through sickness.

Wanderers have no fresh injury concerns following their victory against the Bluebirds.

With 16 points from their last six games, Bolton Wanderers currently sit at the summit of the Sky Bet League Two form table.

Shaun Miller’s injury-time winner against Barrow at the weekend gave Wanderers a deserved victory, their fifth successive win, to put them in the play-off places.

The Latics have won two and lost three from their previous six outings but beat Carlisle United 3-1 at Brunton Park at the weekend to give themselves some confidence heading into tonight’s clash.

Wanderers hosted Latics at the University of Bolton Stadium in October with the visitors running out 2-1 winners after Zak Dearnley’s 90th minute strike earned his team a smash and grab victory.

Nathan Delfouneso had earlier cancelled out Ben Garrity’s strike to even things up, but Dearnley had his say right at the death. Goals from Eoin Doyle and an own-goal by Harry Clarke made it six wins on the spin for Ian Evatt’s men as they comfortably saw off ten-man Oldham Athletic at Boundary Park.

Wanderers were dominant throughout and given the amount of possession they enjoyed were unlucky not to be heading home with more goals under their belts.
After a bright start by the hosts, Wanderers rode that early pressure and took the lead when Clarke steered Gethin Jones’ cross beyond his own ‘keeper.
Latics were down to ten men when Kyle Jameson was shown a straight red for a poor challenge on Nathan Delfouneso midway through the first half.
Wanderers effectively won the contest inside the first half when Doyle netted his 13th goal of the season.
The Wanderers boss made one change to the team that beat Barrow at the weekend with Nathan Delfouneso coming in to replace Lloyd Isgrove who was named among the substitutes.
The hosts won an early corner after Jameson’s cross was cleared by Ricardo Almeida Santos but the set-piece came to nothing and was cleared by Wanderers.
Bobby Grant’s shot from just outside the 18-yard line cleared Gilks’ bar with the Latics starting brightly.
Another Almeida Santos’ clearance resulted in a corner for Oldham as Wanderers eventually dealt with Nicky Adams' delivery into the box.
A quick break away from Wanderers earned them a corner after Doyle’s cross to the near post was deflected behind.
Serhat Tasdemir had a well-struck volley blocked by his own team-mate deep inside Wanderers’ area as the hosts looked to take advantage of their early pressure.
Some determination down the right-hand side by Jones resulted in another Wanderers corner and then an enterprising run, this time by Delfouneso, saw his cross deflect behind as Wanderers started to get more into the contest.
Declan John’s whipped-in delivery caused issues for the Latics defence and Alex Baptiste’s strike went off a defender and behind for another corner.
Wanderers took the lead on 19 minutes after Clarke inadvertently turned Jones’ excellent cross past Ian Lawlor. Delfouenso had found the Welshman in acres of space and his delivery made it difficult for the Oldham defender to deal with under pressure from Doyle.
Jones was in the right place to prevent Tasdemir sneaking the ball in at the far post after Oldham broke down the right.
The hosts were then reduced to 10 men after 27 minutes when Jameson was shown a straight red for a high and late challenge on Delfouneso who had to receive lengthy treatment. It was a terrible tackle which naturally caused a lot of anger among the Wanderers players.
Jones received Antoni Sarcevic’s cross after it came off Carl Piergianni’s head and he volleyed it into the side-netting as Wanderers looked to make their numerical advantage count.
Dapo Afolayan was a real bright spark for Wanderers, and his cross from the far side was intended for Doyle but the Irishman was unable to get his head on it and the ball drifted out for a goal-kick.
Doyle struck his 13th goal of the campaign to double Wanderers lead after 39 minutes. After some tremendous build-up play involving a large number of passes, Afolayan’s curling left-footer came off the post and into the path of the Irishman who made no mistake.
Just before the break, Afolayan tried his luck with a low shot that lacked the power to beat Lawlor after John’s short corner found its way to the winger.
Wanderers started on the front foot as the second half got underway and as expected took control of the play.
Passing the ball around with purpose and looking to attack at every opportunity, they were hungry to add to their first-half tally of two goals.
Kieran Lee was the first Wanderers player to have his name taken after a late challenge on Brice Ntambwe just inside Oldham’s half.
Adams fouled Jones just outside the box to give Wanderers a presentable opportunity, but although John’s free-kick beat the wall, it went straight into the arms of Lawlor.
Evatt made his first change of the game after 61 minutes with George Thomason coming on for Lee.
Piergianni was shown the yellow card for bringing down Afolayan just outside the box as the midfielder was charging in on goal. Doyle stepped up to take the free-kick this time, and it looked to be curling in at the near post only for it to take a slight deflection and go agonisingly wide and behind for a corner.
Wanderers made their second change with just over 20 minutes to go when Marcus Maddison came on for the hard-working Delfouneso.
Maddison looked to get in on the act himself shortly after his introduction, and he intercepted the ball deep into Oldham territory and charged forward but his low effort skewed wide of goal.
Wanderers made a double substitution after 76 minutes with Arthur Gnahoua and Shaun Miller coming on for Afolayan and Doyle respectively.
The result saw Wanderers pick up their sixth consecutive victory, the first time they had achieved this feat since September 2000.
Oldham Athletic: Lawlor, Clarke (Vaughan 85), Jameson, Piergianni, Keillor-Dunn, Grant, (Ntambwe 46) Tasdemir (Fage 46), Diarra, Adams, Bahamboula, McCalmont (Whelan 69).
Subs Not Used: Bilboe (GK), Blackwood.
Bolton Wanderers: Gilks, Jones, Williams, Almeida Santos, Delfouneso (Maddison 69), Doyle (Miller 76), Sarcevic, Baptiste, John, Lee (Thomason 62), Afolayan (Gnahoua 76).
Subs Not Used: Tutte, Isgrove, Jackson.
Goals: Clarke OG (19), Doyle (39). 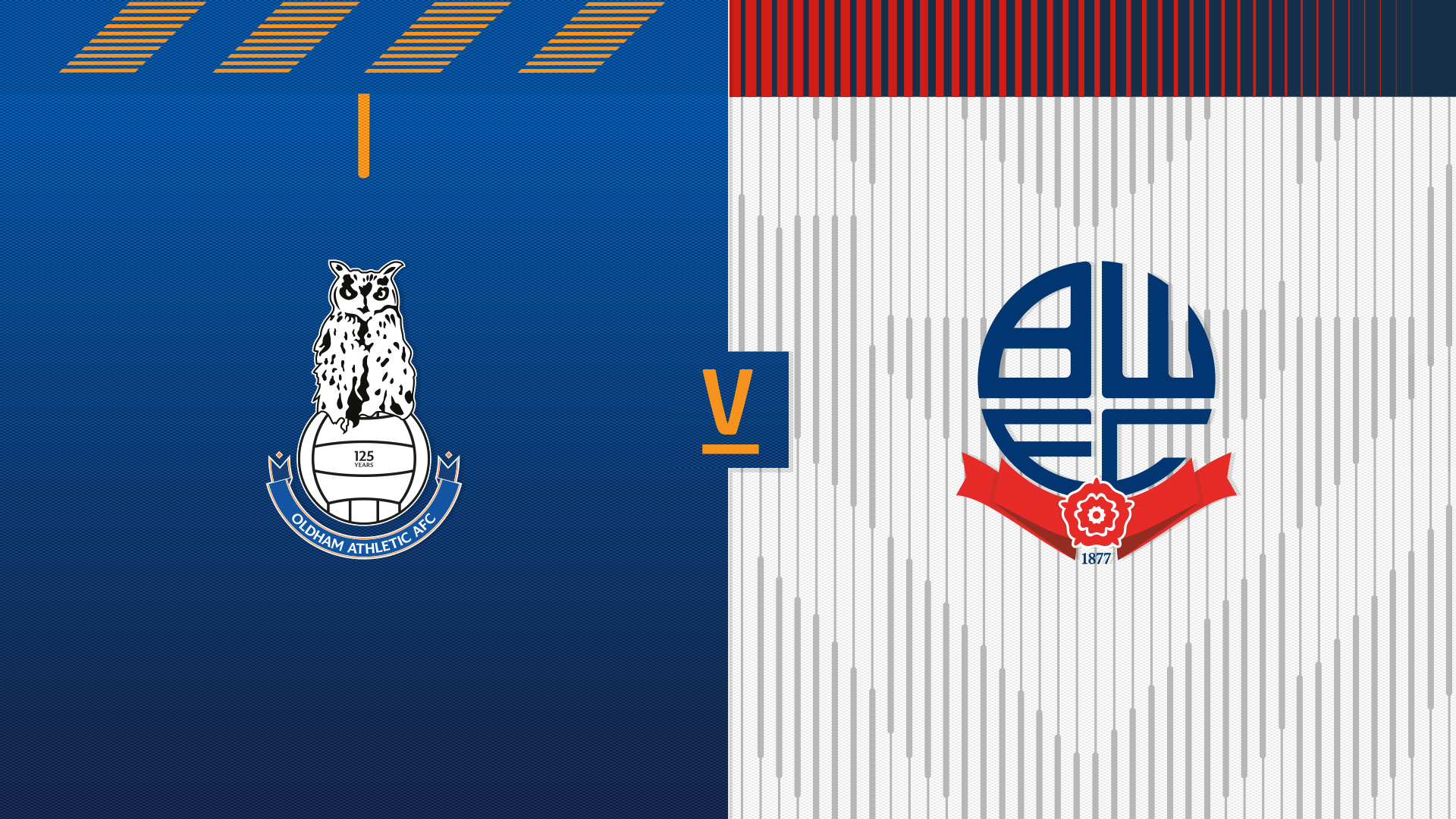 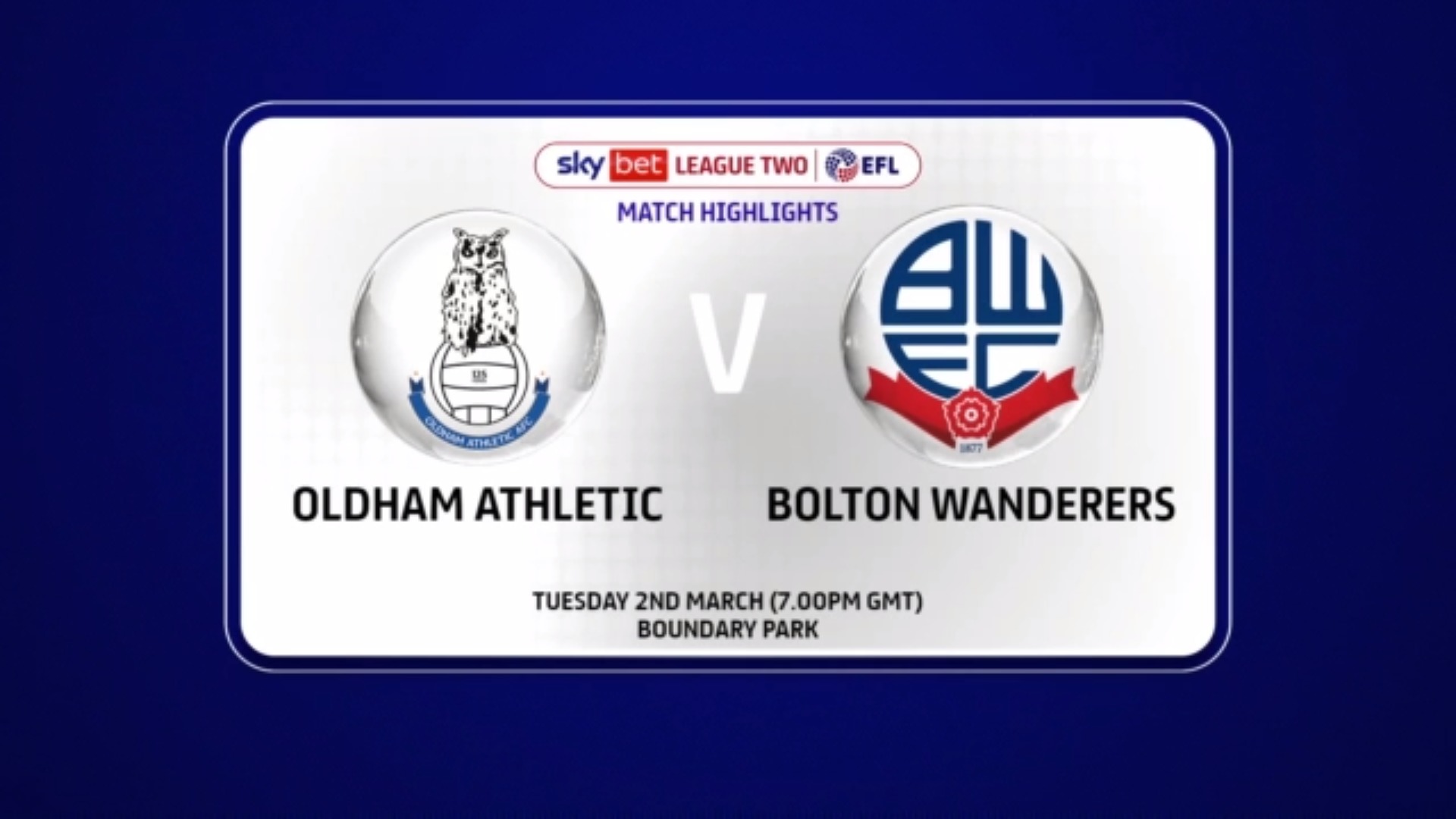 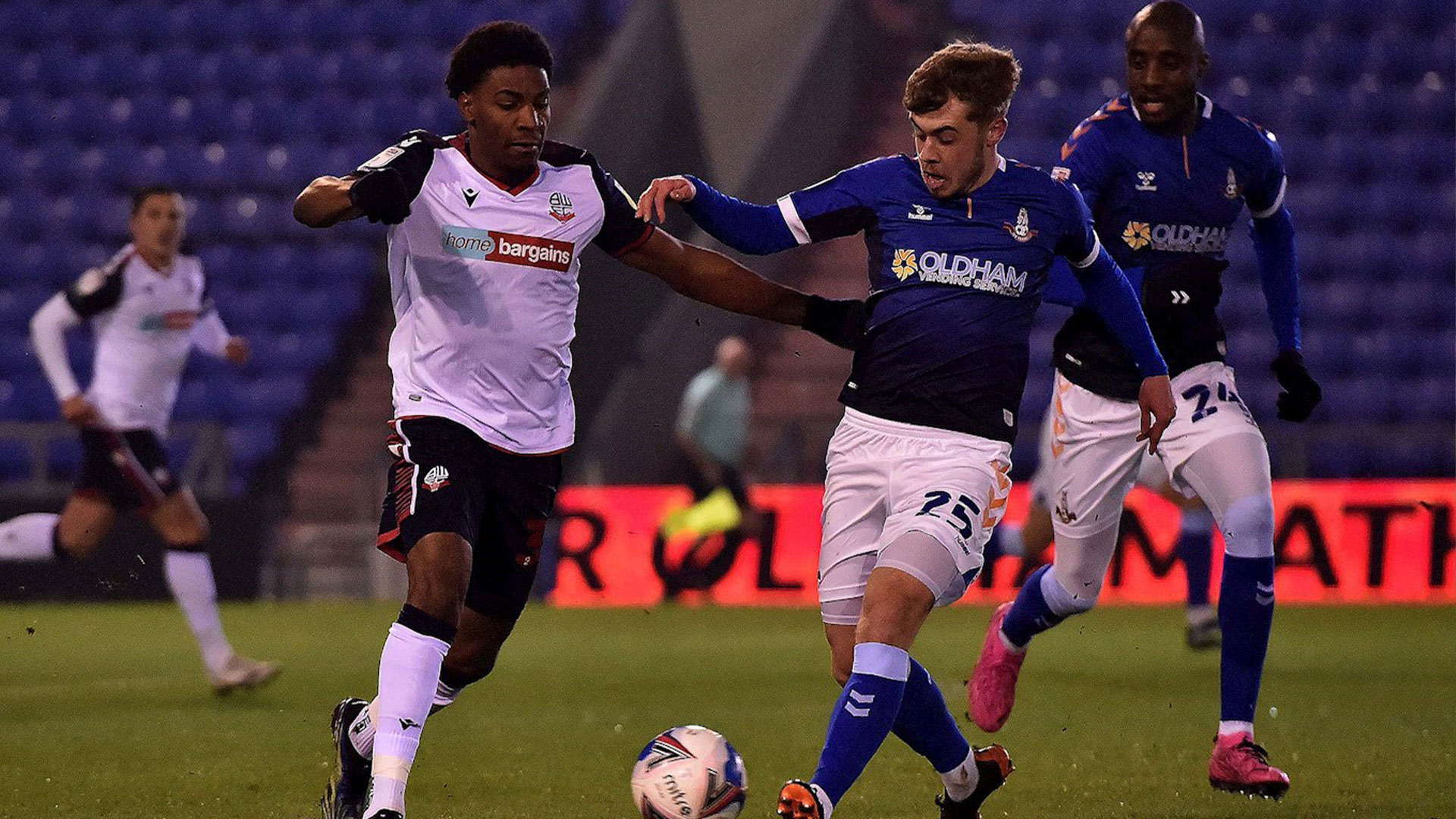