Ian Evatt’s men travel down to West Sussex knowing that a victory against Crawley Town will secure automatic promotion and an immediate return to Sky Bet League One on the final day of the current league campaign.

Defeat against Exeter City last weekend and a victory for Morecambe in their game, saw the gap between Wanderers and the Shrimps reduced to a point.

But the Whites’ fate still remains in their own hands for their first-ever league fixture at the People’s Pension Stadium.

Ian Evatt: “It's obviously a big game and another chance to get a promotion. I’ve been very fortunate that I’ve had many promotions in my football career and one as a manager very early on in my career.

"I’m used to these games and that’s what you’re in football for and then it’s just about the other lads being used to it.

"But we’ve got lots of lads that have been promoted and lots of younger ones that want that on their CV, so we’re fully focused and we know what we have to do and we have to make sure we do the job on Saturday.

“I think it’ll be a tough game. It’s on Sky so there’s the added pressure of Sky.

"I don’t suppose John (Yems) will want to see any opposition team celebrate at his stadium, so that will be their focus to prevent that from happening. We have to be focused on ourselves.

"We know it’s going to be a challenging game and a difficult one, but we need to be at our usual standard and if we are, we’re hopeful we can get the right result.”

The game at the People’s Pension Stadium is being broadcast live on Sky Sports Football (Kick Off 3pm).

Consequently, the game will not be streamed live on iFollow BWFC

However, audio passes will be available, priced at £2.50, for those supporters who would like to listen to commentary of the match.

Alternatively, supporters who don’t have a Sky Sports subscription can watch the game if they purchase a 24-hour Now TV pass.

The Club is reminding people not travel to Crawley or gather in large crowds at the University of Bolton Stadium or anywhere else.

Thank you for your co-operation.

Young midfielder George Thomason is likely to return to the starting XI in Lee’s absence.

Otherwise, there are no fresh injury concerns for Ian Evatt’s men.

Saturday’s last gasp defeat at home to Exeter City brought to an end a two-game winning run for Wanderers which included a victory against nearest promotion rivals Morecambe.

Crawley have drawn two and lost one of their last three games and currently reside in 12th position in the Sky Bet League Two table.

George Francomb netted the game's only goal to earn an in-form Crawley a victory at the University of Bolton Stadium in early January.

Although Wanderers created a plethora of gilt-edged chances, they were unable to get anything from the game to start 2021 with defeat.

Bolton Wanderers saved the best until last as they emphatically saw off ten-men Crawley Town to seal automatic promotion and a sensational return to Sky Bet League One.

Goals from captain Antoni Sarcevic, Dapo Afolayan, Eoin Doyle and Lloyd Isgrove brought the curtain down in style to complete a remarkable season for Ian Evatt’s men.
Wanderers made one change from the side that lost to Exeter City last weekend with George Thomason coming in for the injured Kieran Lee who was sidelined with a calf injury.
Wanderers earned an early free-kick when Lloyd Isgrove was scythed down by Tony Craig on the halfway line. MJ Williams’ free-kick came to nothing as the linesman’s flag was raised for an offside decision.
A Crawley attack down the left was cleared by Dapo Afolayan at the far post following a cross into the box from the left by Nicholas Tsaroulla, as the hosts looked to seize an early advantage.
But Wanderers took the lead through their captain Sarcevic. The midfielder cut in from the left-hand side after beating the offside trap and latching onto Declan John's pass before superbly finishing with a right-footer into the roof of the net.
George Francomb was shown a yellow for a cynical trip on George Thomason who looked set to break through on goal. The Crawley skipper would survive another twenty minutes before being given his marching orders by referee, Bobby Madley.
The visitors could have extended their lead further when Afolayan stole possession off Joe McNerney over on the flank. Eoin Doyle moved into space as the winger charged towards goal, but the on-loan man opted to shoot from a narrow angle and his effort was blocked.
At the other end, Alex Baptiste headed behind to snuffle out a cross from the right as Crawley looked to find a way back into the game.
Jack Powell fired narrowly over after Crawley surged forward but Wanderers extended their advantage thanks to Afolayan’s first goal for the club.
The hard work came from Gethin Jones moved into a pocket of space to receive a pass from Lloyd Isgrove before finding his teammate who fired home from close range.
Seconds after the restart and Wanderers may have had a third with Isgrove taking advantage of some sloppy defending before the danger was eventually cleared.
Doyle had the ball in the net for what looked to be Bolton's third goal, but his effort was ruled out for offside. A decision that was hotly disputed by the players and coaching staff alike.
The hosts lost their captain just after the half-hour mark when Francomb was shown a second yellow for a foul on Afolayan. At this stage, Crawley had a real mountain to climb. Down to ten men and trailing by two goals.
Wanderers threatened every time they went forward and Doyle was unlucky to see a shot take a deflection before landing in Glenn Morris’ grateful grasp.
Evatt’s troops were comfortable in possession and were passing the ball around with aplomb.
Afolayan found the ball just outside the box but his effort lacked the power to trouble Morris.
Sarcevic almost got his second with a carbon copy of the opening goal when he cut in from the left, but his strike went narrowly over. Wanderers really had the bit between their teeth.
Isgrove went down under a heavy challenge by Craig in the box after he latched onto a long pass from Ricardo Almeida Santos but the officials waved away Wanderers’ penalty appeals.
Wanderers made it three just after the restart as Doyle put the finishing touches to an excellent pass by Sarcevic with a sweet left-footed curler into the bottom corner for his 19th goal of the campaign.
Crawley hadn't given up hope completely and Tsaroulla’s shot after cutting in went just over Matt Gilks’ bar.
Wanderers were hungry for more and Sarcevic’s volley after latching onto Jones’ throw landed straight into Morris’ hands.
Evatt made his first change with 25 minutes of the game remaining when he brought on Nathan Delfouneso for Sarcevic.
Zack Elbouzedi came on for the impressive Afolayan as Wanderers made another substitution.
Isgrove made it four with just over ten minutes remaining to strengthen Wanderers’ lead and put the cherry on top of the icing, on top of the cake to all but confirm the promotion.
Evatt made two final changes with Shaun Miller and Arthur Gnahoua coming on for Doyle and Isgrove.
Morris pulled off a great save to keep out Jones whose thunderous effort looked destined for a fifth.
Miller and Delfouneso combined well with the latter just wide of the mark as he got a shot goalwards.
The hosts pulled a goal back with a minute remaining through Davide Rodari who lashed a shot past Gilks following an uncharacteristic moment of hesitancy from Ricardo Almeida Santos.
Crawley Town: Morris, McNerney (Rodari 46), Tunnicliffe, Craig, Davies (Sesay 67), Tsaroulla, Francomb, Hessenthaler, Powell, Wright, Nadesan (Frost 78).
Unused Subs: Nelson, M. Wright, Bulman.
Goal: Rodari (89)
Bolton Wanderers: Gilks, Jones, Almeida Santos, Baptiste, John, Williams, Thomason, Sarcevic (Delfouneso 71), Isgrove (Gnahoua 80), Afolayan (Elbouzedi 75), Doyle (Miller 80).
Unused Subs: Jensen, Delaney, Jackson.
Goals: Sarcevic (9), Afolayan (26), Doyle (48), Isgrove (77)

Season tickets for the 2021/22 Sky Bet League One campaign can now be renewed by current season ticket holders. Renew during the Early Purchase Period and you will pay less than you did for the current season. Click here for more information. 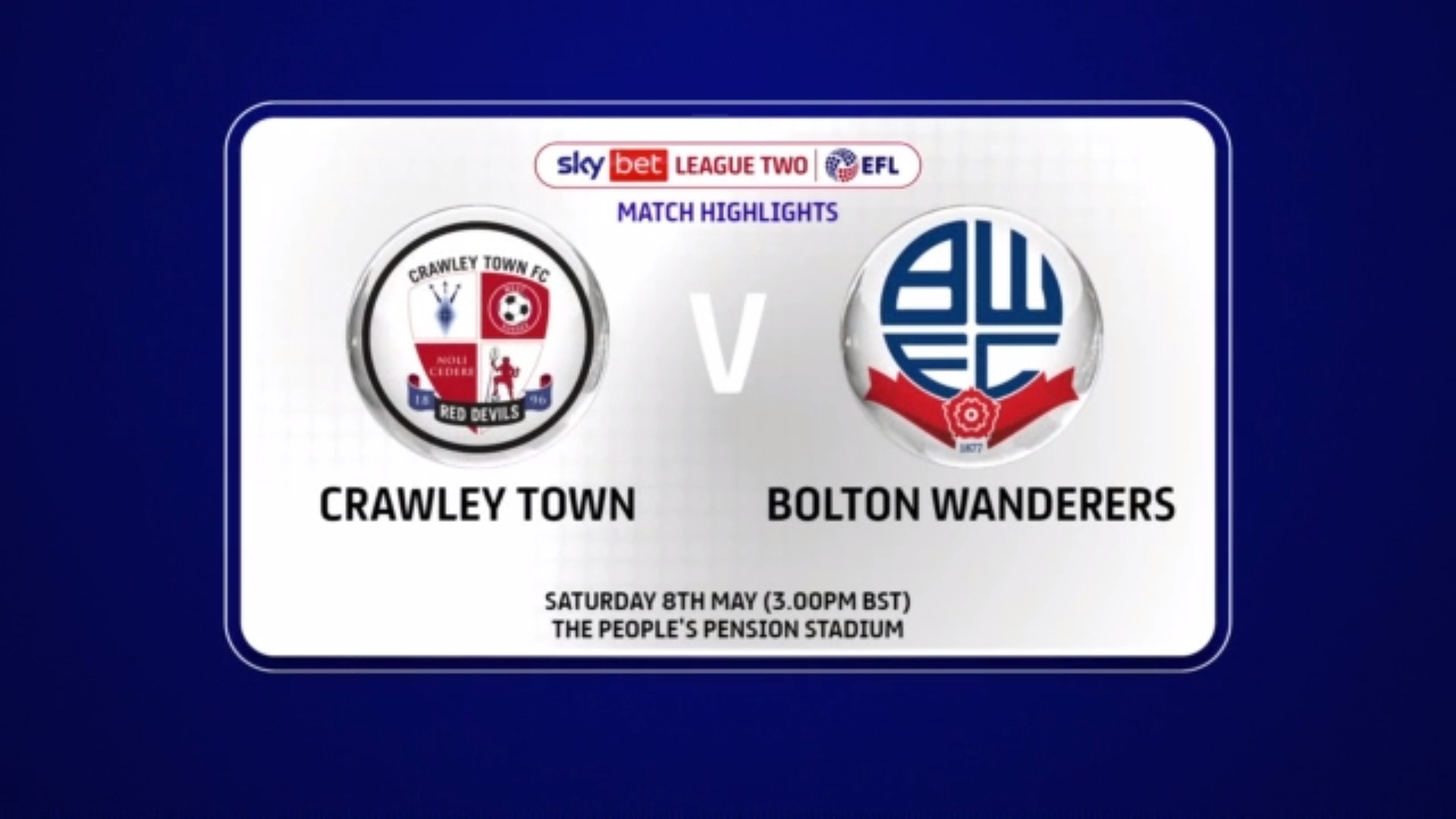 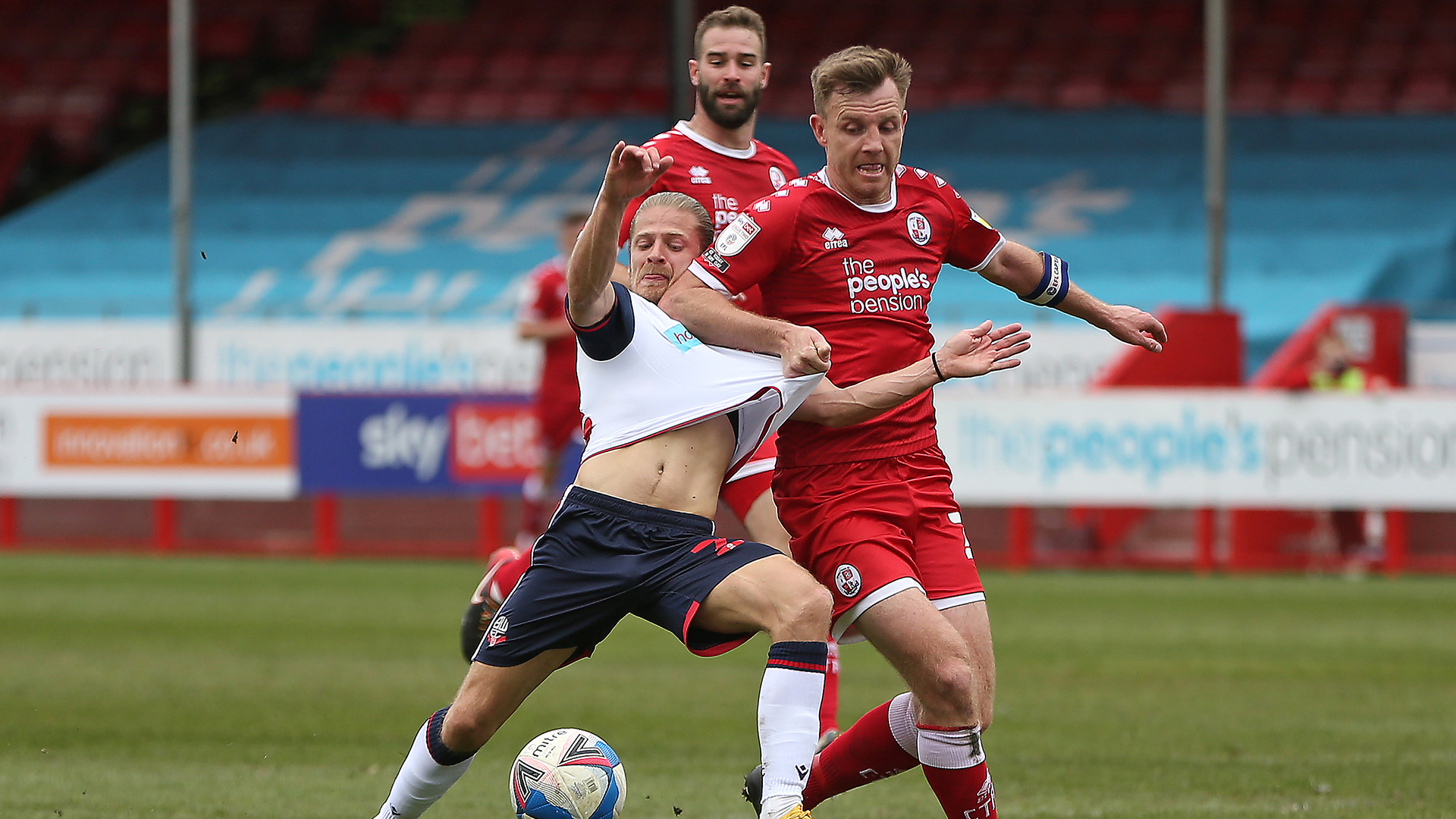