Wanderers are back in home action, ten days after the last fixture at the University of Bolton Stadium against Oldham Athletic. The opponents this evening Bradford City are making their second trip to BL6 in just under two months following the Carabao Cup tie between the two sides on the opening day of the 2020/21 campaign.

Ian Evatt: "It’ll be a tough game. Bradford are a big club and they’ve got some good players. They’ve already beaten us here in the cup which we were disappointed with, so we owe them one.

"We want to turn that form around on Tuesday and as I’ve said, if we can play consistently like we did at times on Saturday, and at times against Barrow without the bad start, then hopefully we can win the game."

Stuart McCall: “It’s not been a rotten start to the season but obviously it’s not been great.

“We’ve beaten a couple of sides that have been struggling and lost to two really good ones on the day.

“But I’m not going to overreact every time there’s a poor result. We’ve got 46 games and had seven.

"There's a lot of improvement but we will do. It's going to be a process but we will be judged at the end of the season, not after seven games.

"I'm confident that when we get to the back end of the season, we'll be in a position that we are comfortable with."

Wanderers supporters can watch the clash with Bradford City by purchasing an iFollow BWFC video match pass for just £10, meaning you don’t have to miss a kick of the action.

Eoin Doyle is likely to miss out on Tuesday evening’s fixture with a hamstring strain which forced him off after 50 minutes against Cambridge United at the weekend.

The quartet of Gethin Jones, Tom White, Lloyd Isgrove and Shaun Miller are all nearing a return to action and could come into contention for a return to the matchday squad.

In the Bradford camp, Bryce Hosannah missed out on the weekend’s defeat to Newport County with injury, but could come back into content for Stuart McCall’s side – so too could Reece Staunton.

Gareth Evans is ‘touch and go’ to feature against Wanderers, whilst Levi Sutton is unlikely to be available.

Wanderers are still in search of their first home victory of the campaign and lost to Oldham Athletic ten days ago at the University of Bolton Stadium.

Since then Ian Evatt’s side have picked up two draws in two away fixtures, going to Barrow and Cambridge United to take a share of the spoils, with in-form captain Antoni Sarcevic influential in those fixtures.

Bradford have struggled to find consistency in recent weeks. Losing at home against Harrogate Town in a televised clash at the Utilita Energy Stadium a week ago yesterday, since then they have emphatically beaten Mansfield Town away from home, but have also been emphatically beaten by Newport County at the weekend.

The last time the two teams met was on the opening day of the campaign at the University of Bolton Stadium in the Carabao Cup.

The Bantams secured a passed through to the next stage of the competition with victory thanks to goals from Lee Novak and Harry Pritchard, either side of Antoni Sarcevic’s well-taken equaliser.

Wanderers dominated the first half and created a plethora of chances throughout.

Ian Evatt made just one enforced change from the team that drew 1-1 to league leaders Cambridge United at the weekend with Arthur Gnahoua coming in for the injured Eoin Doyle.

Wanderers started very brightly and had their opponents on the backfoot from the off.

Following some great work by Peter Kioso on the right flank, the ball fell to Andrew Tutte whose 20-yard effort went over the bar.

Moments later, Nathan Delfouneso charged up the field after the Bantams had surrendered possession but his effort failed to trouble Richard O’Donnell who held onto the ball.

Alex Baptiste got in on the attacking act after receiving the ball off Arthur Gnahoua but his powerful volley was charged down by Paudie O’Connor.

Wanderers’ goal certainly had a sense of inevitability about it when Delfouneso grabbed his third strike of the season. The ball hit the cross bar twice before the big striker powered home from just inside the Bantams’ box. Firstly, Antoni Sarcevic’s lob hit the top of the woodwork, before an attempted Elliot Watt clearance again hit the underside.

Bryce Hosannah lost his marker with a deft body swerve but he saw his effort blaze over the cross bar after some tidy possession play by the visitors.

Gnahoua’s direct running had the visitors on the back foot and after the forward got onto the end of a Sarcevic pass, his shot deflected off two Bradford defenders before being cleared.

Callum Cooke spurned a glorious chance to equalise just before the break when Clayton Donaldson’s cross found him just outside the penalty box, but his volley was well off target and glided over the bar for a goal kick.

Gnahoua was felled just outside the 18-yard line deep into time added on at the end of the half. Crawford’s free-kick was well-struck but went just over the bar.

Crawford spun away from his marker to carve open a chance from distance shortly after the restart but his effort went straight into the arms of Richard O’Donnell.

Harry Brockbank and Sarcevic played a smart one-two on the edge of the box, but the former could only curl his effort high and wide.

Ryan Delaney was unable to direct his header towards goal after latching on to Crawford’s lofted free-kick when Sarcevic was held back by Finn Cousin-Dawson.

Some great work out on the channel by Delfouneso saw Wanderers get into a great position, but the goalscorer’s attempted cross to Sarcevic, who was charging in at the far post, was a touch too heavy.

Crawford should have done better after Delaney burst into the danger area. The midfielder’s curling effort was off-target.

Again, Crawford got into an excellent position to shoot after some great play on the right but his effort proved to be wasteful.

At the other end, Wanderers got out of jail when Hosannah cantered into the box but his effort, whilst under a challenge from Delaney, he hit the side netting.

Evatt made his first change on 64 minutes when Jamie Mascoll came on for Brockbank.

Peter Kioso deflected Connor Wood’s shot from the edge of the box as Bradford enjoyed their best spell of the game.

Delfouneso conceded a penalty when he tripped Anthony O’Connor with 20 minutes to go, but Billy Crellin made a stunning save to deny Billy Clarke from the spot.

The visitors were still in the ascendency in search for an equaliser and Mascoll had to be sharp to turn away the ball for a corner as it was centred.

Wanderers should have put their noses further in front when Crawford received Gnahoua’s pass; however, his first time shot from 15 yards out went narrowly wide of O’Donnell’s left hand post.

Andrew Tutte was replaced by Brandon Comley with 14 minutes to go as Evatt made his second change.

It was a nervy end for Wanderers but they hung on to claim a deserved victory against the Yorkshiremen. 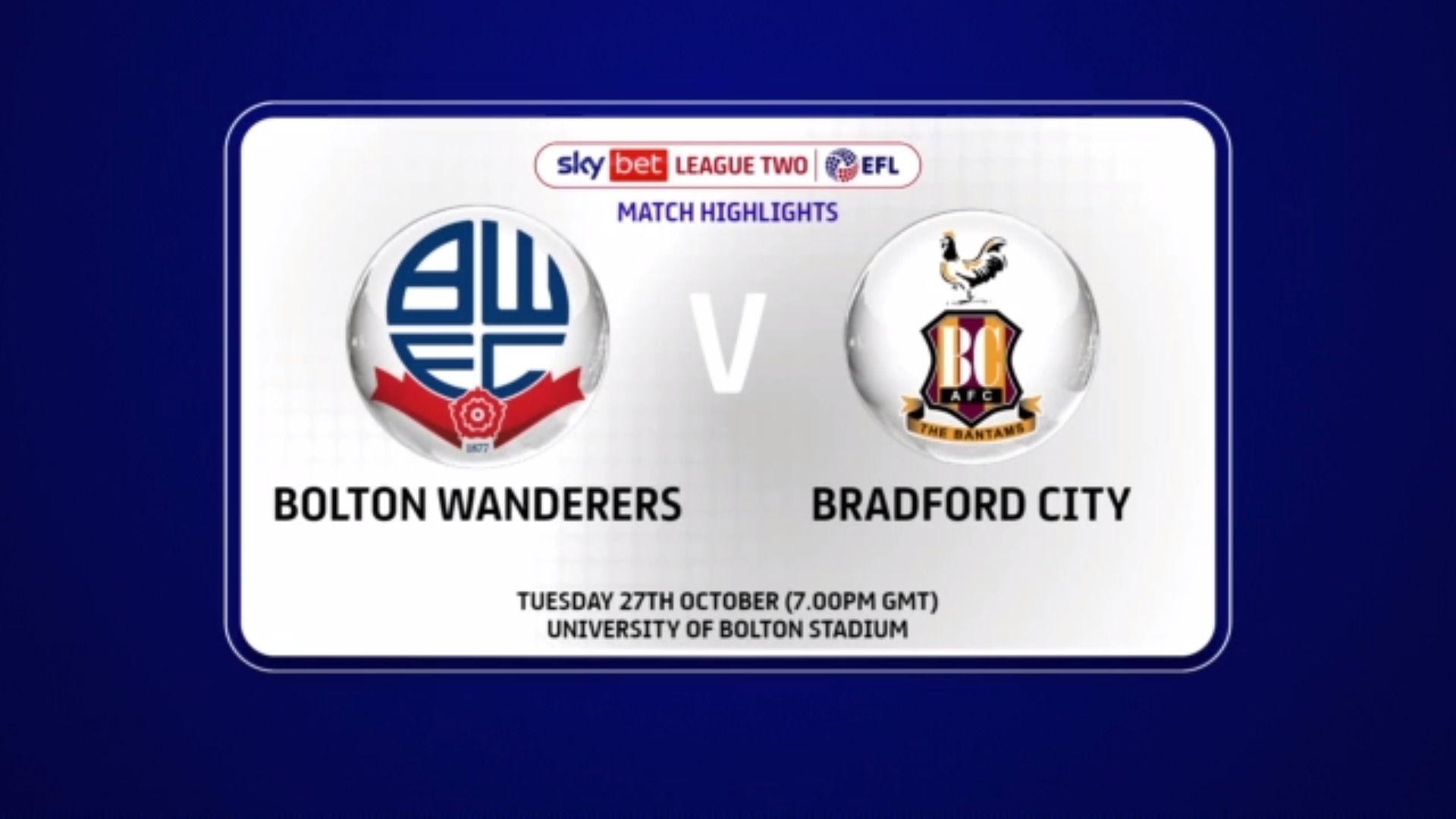 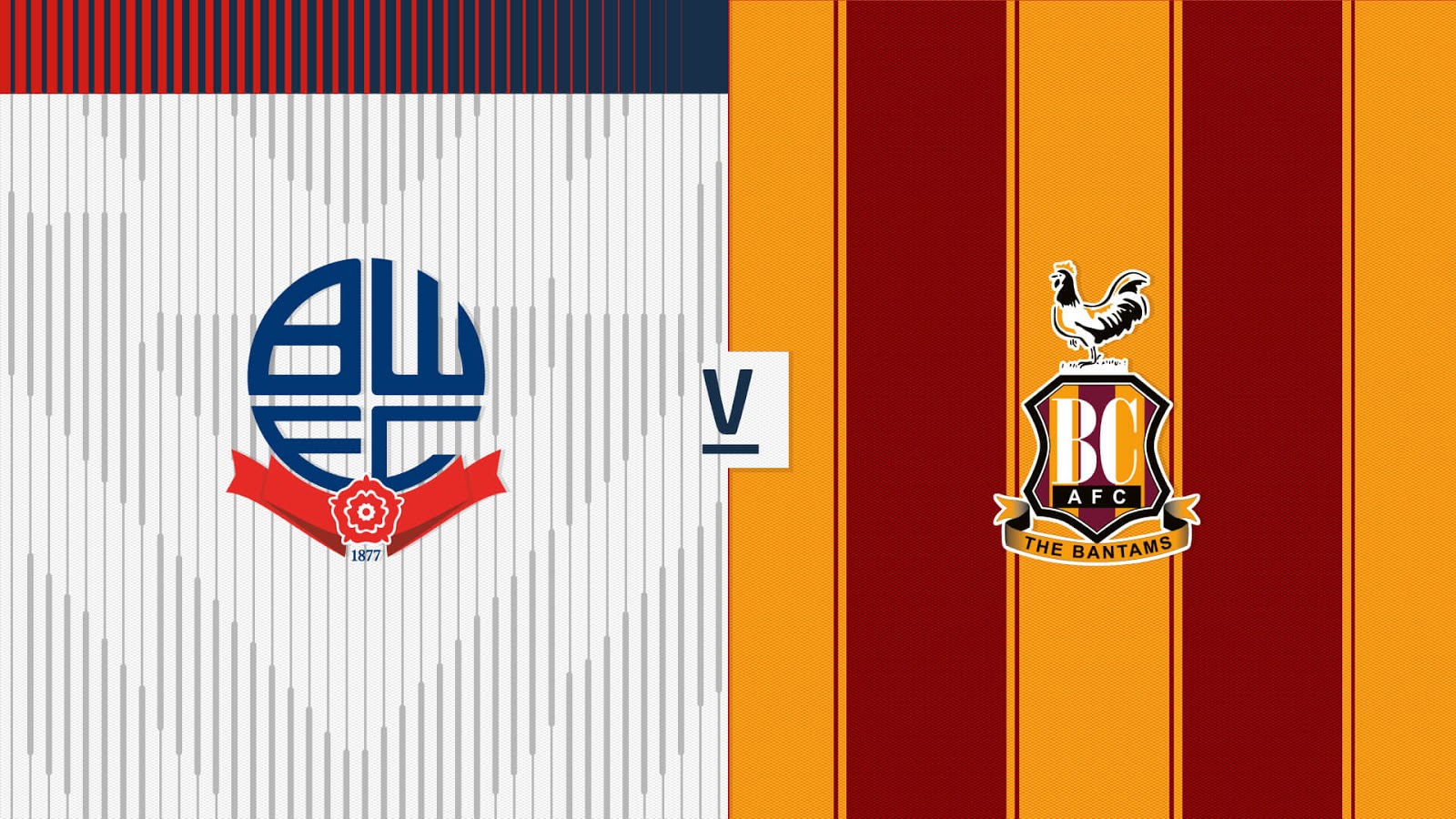