Wanderers are back on the road with an away fixture against league leaders Cambridge United on Saturday afternoon. Ian Evatt’s men are looking to build on a point earned at Barrow during the week thanks to Antoni Sarcevic’s last gasp equaliser.

Ian Evatt: ‘Fair play to them, they’ve started great and scored a lot of goals, but it’s a good opportunity for us to go and show what we’re about. It’s another game of football and another chance for us to go and win. Why not?

‘If I was my defenders and goalkeeper, I’d be thinking we’re up against a good attack here let’s try and keep a clean sheet. One clean sheet in ten isn’t good enough. I said that to them this morning. Let’s go there, do the best we can and hopefully get the three points.’

Mark Bonner: ‘It will be a difficult game. We won’t be fooled by their start to the season, they’ve got good players and they’ve got a good side. We’ll have to work hard and accept that at times we won’t have the ball, but we also have to work hard to put our stamp on the game and try to dominate large periods if we can.

‘We need to be ruthless in those times when we’re on top, which we have been. We also need to defend well and resolutely in the periods where they have possession.’

Wanderers supporters can watch the clash with Cambridge United by purchasing an iFollow BWFC video match pass for just £10, meaning despite not being able to make the trip to Cambridgeshire, you don’t have to miss a kick.

Nathan Delfouneso missed out on Tuesday night’s trip to Barrow due to his partner being in labour and Ian Evatt has now confirmed that she has given birth to a little boy. He will now be back available for selection, and many congratulations to the pair of them.

Tom White has trained during the second half of the week and could now be available, whilst Lloyd Isgrove and Shaun Miller have stepped up their recovery and move closer to a return to action.

Mark Bonner confirmed he doesn’t want to make too many changes to the team at once, despite speaking about fatigue coming into the equation due to the volume of games. In form striker Paul Mullin is likely to start for United following his mid-week hat-trick in a 3-1 victory against Port Vale.

Wanderers go into the weekend’s game on the back of a 3-3 draw at Barrow but are three league games without victory having lost to Oldham Athletic and picked up the midweek draw and a draw against Grimsby Town recently.

Ian Evatt’s men's only victory of the campaign so far has come on the road, beating Harrogate Town at the Keepmoat Stadium at the beginning of the month.

Cambridge will be high on confidence and come into the clash top of League Two and on the back of three league victories in a row, against Newport County, Scunthorpe United and Port Vale. During that time they have managed to score ten goals.

The last time the two teams met was all the way back in January 2000 in an FA Cup tie at Abbey Stadium. Wanderers went a goal down to a Trevor Benjamin strike but came back to win the game, with goals from Bob Taylor (2) and Eidur Gudjohnsen securing a 3-1 victory.

The two sides last met for a league fixture in April 1991 again at the Abbey Stadium, but this time United would earn a 2-1 Division Three victory.

ANTONI SARCEVIC’S second goal of the week saw Bolton Wanderers come from behind to earn an impressive point against the league leaders Cambridge United at Abbey Stadium.

The Wanderers’ captain rounded off a 16-pass move to cancel out Billy Crellin’s own-goal which had threatened to spoil an impressive performance away from home.
Ian Evatt made two changes from the side that fought back to draw against Barrow in midweek.
Nathan Delfouneso regained his place in the the starting XI at the expense of Arthur Gnahoua, who dropped to the bench, while Andrew Tutte replaced Brandon Comley.
Harry Brockbank had the game’s first effort after four minutes, but his wayward shot from distance, after being picked out by Ali Crawford, went over Dimi Mitov’s cross bar.
Crawford floated in a dangerous free-kick after Delfouneso was fouled 30 yards out. The ball was cleared at the far post by the Cambridge defence.
After Delfouneso held up the ball over on the far side, he found Brockbank who charged up the flank. The defender seemed to be in two minds whether to cross or shoot, but the ball ended up beyond for a goal kick after another promising foray into the United third.
United earned a free-kick just outside the 18-yard box after Delaney tumbled into Paul Mullin. Idris El Mizouni’s resulting set-piece was chipped into the grateful hands of Billy Crellin.
Wanderers almost took the lead moments later when Doyle put in a fantastic ball for Sarvcevic whose shot went narrowly wide of Mitov’s right hand stick, with Brockbank inches away from connecting.
Cambridge always looked threatening on the counter and Luke Hannant’s shot deflected into the hands of Mitov.
Seconds later and Wanderers charged up the field with a flowing move which culminated in Peter Kioso’s thunderous drive into the box being parried away by Mitov, who was by far the busier of the two keepers.
Baptiste’s foul on Hannant earned the hosts a free-kick on the nearside, which was floated in by Hiram Boateng. Brockbank was fouled as he attempted to clear the ball.
A cross from Kioso on the left evaded the head of Eoin Doyle as the Irishman was looking to break the deadlock.
United’s best chance came just before the break when Hannant broke into the box after being found by El Mizouni, but the midfielder’s low effort drifted wide of Crellin’s far post.
A stunning move by Wanderers ended with Delfouneso’s volley from distance drifting wide. Brockbank showed some decent footwork to find the chest of Doyle who set up his fellow striker for the chance.
No changes were made during the interval as Wanderers looked to build on their positive first-half display.
Brockbank had the ball in the back of the net to put the finishing touches on a brilliant move involving Crawford and Sarcevic but the linesman on the far side flagged for offside.
Doyle limped off after 50 minutes with what appeared to be a hamstring strain. Arthur Gnahoua came on for the Irishman.
Delaney conceded a free-kick when he upended Harrison Dunk just outside the box. Boateng took the kick and it sailed over the bar of Crellin.
The hosts won another set-piece this time right in the centre just outside the box after Baptiste upended Kyle Knoyle.
Paul Mullin, who had largely been anonymous throughout the game, took the kick but drilled his low effort wide of goal.
The hosts took the lead through Jack Iredale. The ball was lofted into the box and hung in the air, Crellin attempted to punch the ball clear and it somehow ended up in the back of the net.
A great sweeping move, starting in Wanderers’ own third saw Kioso break down the right hand side after some superb work by Delfouneso. The wing back’s centre evaded everyone before the hosts eventually won a free-kick.
Wanderers got on terms in glorious style through a stunning finish by skipper, Sarcevic, who spun and slotted the ball into the back of the net after some wonderful build up play which incorporated 16 passes.
It was no less than Wanderers deserved after Crellin’s earlier error gave the hosts an unwarranted lead.
And the visitors could have got their noses in front but for Dimi Mitov’s sublime save to keep out Defouneso’s close range effort after the striker latched onto Sarcevic’s pass following some good work by Kioso on the flank.
Cambridge United:
Mitov, Knoyle, Darling, Taylor, Iredale, Hannant, Digby, Boateng (May 65), Dunk, El Mizouni (Ironside 59), Mullin
Subs Not Used: Burton, Cundy, Dallas, Davies, Knowles.
Bolton Wanderers:
Crellin, Kioso, Brockbank (Gordon 72), Almeida Santos, Baptiste, Delaney, Crawford, Tutte, Doyle (Gnahoua 50), Delfouneso, Sarcevic.
Subs Not Used: Taft, Hickman, Mascoll, Greenidge, Darcy 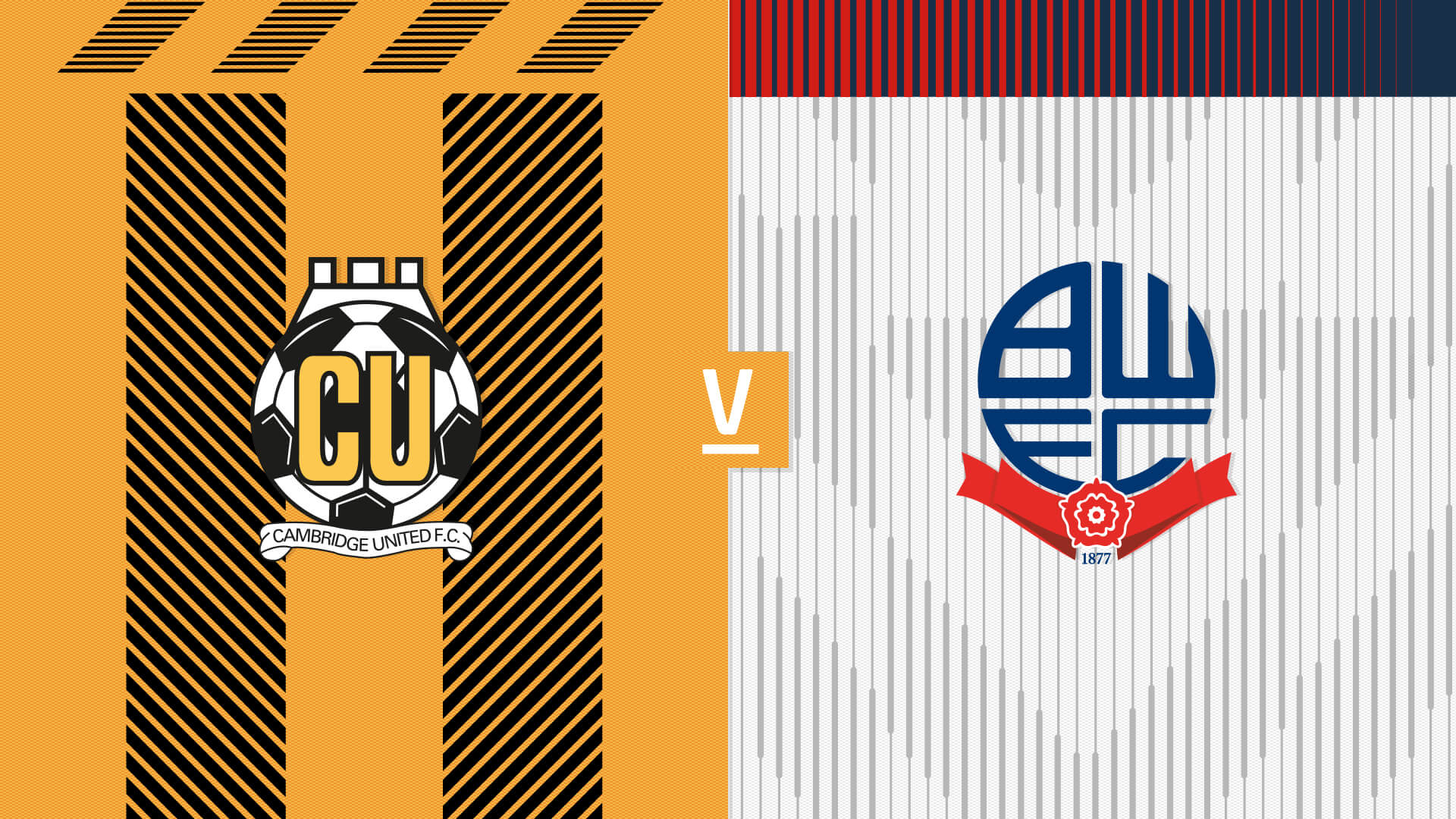 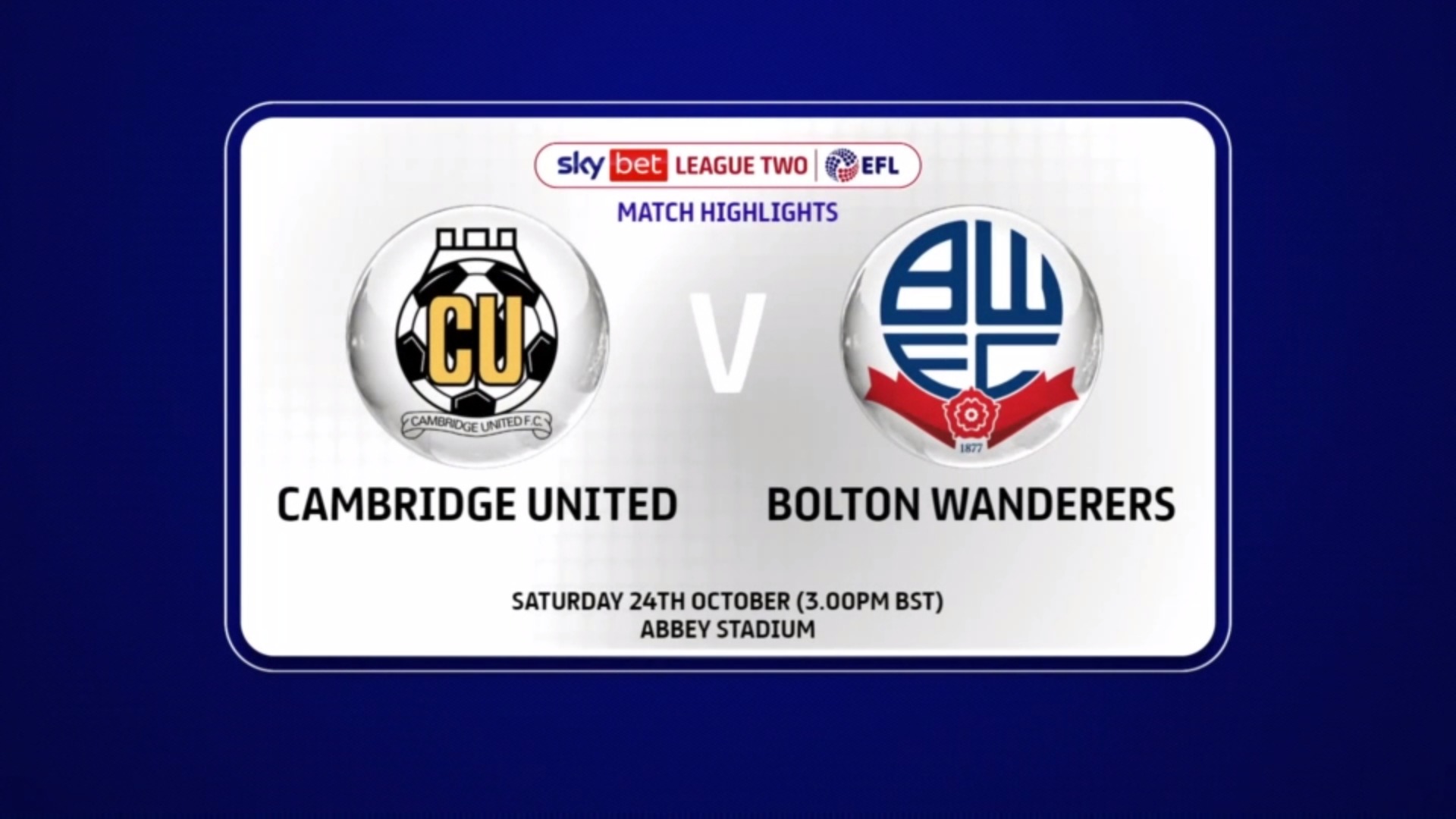 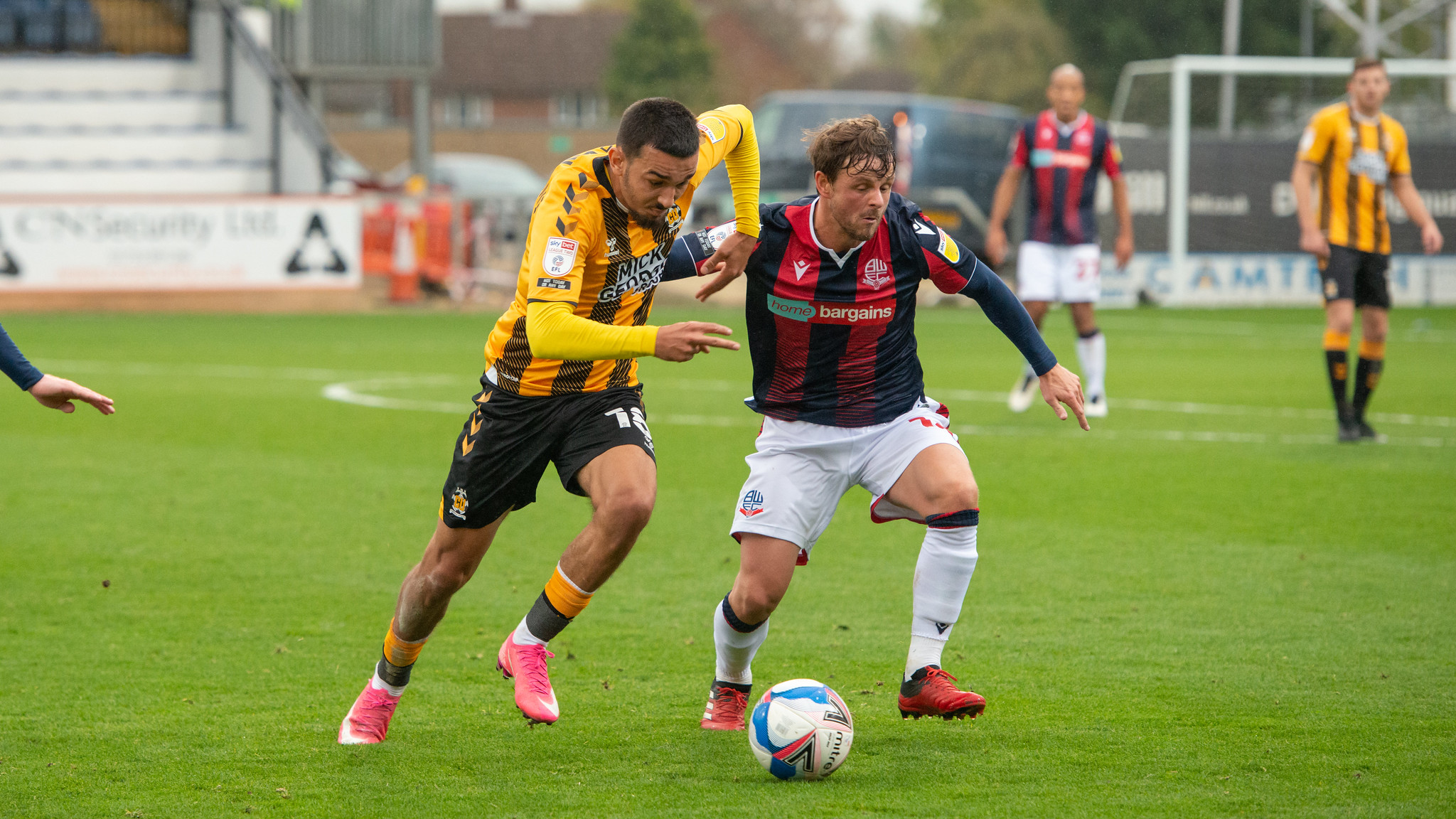