Wanderers prepare for their first away fixture of the 2021/22 season with a trip to Plough Lane to take on AFC Wimbledon on Saturday.

Both teams will head into the fixture with a fair amount of confidence following midweek victories in the Carabao Cup. Wanderers edged Sky Bet Championship side Barnsley on penalties at the University of Bolton Stadium after a goalless draw, and AFC Wimbledon were victorious against London neighbours Charlton Athletic, winning 1-0 at the Valley.

The Dons also got their league campaign off to a winning start, with a 2-1 victory at Doncaster Rovers last weekend, whilst Wanderers were held to a 3-3 draw at home to MK Dons.

Ian Evatt: “It’ll be a tough and difficult game. They have changed formations a few times and played different systems, so they’re a difficult team to prepare for. But, we know what we are going to have to do is show character and courage, and fight and battle. Hopefully, if we do that we can implement our own game style on them.”

Mark Robinson: “He (Ian Evatt) has done an incredible job. Their results were unbelievable after the start they had last season. They play really good football, and they’re really hardworking and on the front, so it’s going to be a really, really tough challenge.

In his pre-match press conference, manager Ian Evatt has said he is happy with the squad of players he has to choose from heading to London. Ricardo Almeida Santos returned to the starting eleven on Tuesday evening and could retain his place in central defence on Saturday.

Impressive performances during the week from the likes of Elias Kachunga, Kieran Lee, and Lloyd Isgrove could see them push for places in the starting eleven.

For those supporters who would like a post-match drink then the Halfway House and The Earlsfield public houses right next to Earlsfield Train station accept away supporters and it is about a 10-minute walk from the stadium.

Please note: AFC Wimbledon NO longer play at Kingsmeadow, and are now at Plough Lane. The address for their new stadium is as follows: Plough Lane, London, SW17 0NR

For the weekend’s fixture, AFC Wimbledon will be testing a semi cashless Stadium. This means that most of the Stadium will only accept card payments apart from the club shop and Matchday Magazine sellers. Fans who turn up on the day with only cash will be able to purchase vouchers in denominations of £10 at the Matchday Magazine stalls which can then be used to buy food and drinks in the concessions.

Wanderers have never faced AFC Wimbledon at the newly built Plough Lane, and the last visit to London to take on the Dons came in March 2020 when Keith Hill’s side travelled to Kingsmeadow. Neither team could find a breakthrough and had to settle for a point apiece and a goalless draw.

Both sides shared the points in a six-goal thriller in London as AFC Wimbledon fought back to earn a point against Bolton Wanderers at Plough Lane.

Although the hosts took a lead through Will Nightingale, Wanderers got themselves in front shortly afterwards when Eoin Doyle converted from the spot before Josh Sheehan grabbed his second goal in successive league games.
And when Dapo Afolayan extended Wanderers’ lead shortly after half-time it appeared that the points were heading north.
But strikes from substitutes Aaron Pressley (penalty) and Dapo Mebude ensured the game ended all square.
Joel Dixon made his first league start for Bolton Wanderers while Ricardo Almeida Santos returned to central defence as manager Ian Evatt made two changes from the side that drew 3-3 against MK Dons on the opening day of the season.
The hosts won an early corner when Almeida Santos cleared away Ayoub Assal’s cross from the right-hand side. It was a wasted effort as the ball was sent in only to be intercepted by Eoin Doyle who cleared.
Wanderers broke down the left through Dapo Afolayan and the ball made its way to Josh Sheehan who kept the chance alive. However, Doyle was unable to get on the end of the Welshman’s pass.
At the other end, Wimbledon broke away at pace which ended up with Jack Rudoni firing low and wide of Joel Dixon’s left-hand post from 25 yards out.
Nesta Guinness-Walker’s long throw from the right was met by a header from Alex Baptiste but it was only cleared into the path of Luke McCormick who sent his effort wide of goal.
The hosts took the lead after 20 minutes when Nightingale rose to plant home Anthony Hartigan’s cross after his initial free-kick was returned.
The scores were immediately levelled when Doyle converted from the spot after keeper Nik Tzanev felled Afolayan, a foul for which he was shown a yellow card. The Irishman opened his account for the season with a precise strike into the bottom right-hand corner.
Wanderers got themselves in front after 27 minutes when Sheehan volleyed home Doyle’s right-sided centre to claim his second goal of the campaign.
The Welshman was bossing the midfield and his ball to Afolayan resulted in the winger’s shot being deflected for a corner shortly afterwards.
Sheehan was cautioned for a foul on Ayoub Assal with ten minutes of the half remaining.
The visitors won a dangerous free-kick after Afolayan’s probing run was curtailed unfairly by Dons captain Alex Woodyard.
Sheehan’s set-piece was caught by Tzanev to momentarily subdue the pressure his team were being placed under.
Wanderers extended their lead shortly after the restart when Afolayan stretched to guide home Amadou Bakayoko’s pinpoint cross from the right after Jones powered his way into the Dons’ half.
In response, Ollie Palmer should have done better when he reached Cheye Alexander’s deep cross only to head across the face of the goal.
The goal sparked some life back into the hosts and they upped the pressure with a series of corners and balls into Wanderers’ box which were all dealt with fairly comfortably.
Jones picked up a yellow for tugging Assal’s shirt which presented Wimbledon with a free-kick on their left-hand side.
The visitors were having to defend stoically as the Dons were trying valiantly to get back in the game.
Ben Heneghan was cautioned for a poor challenge from behind on Doyle as Wanderers, buoyed by incessant chanting from the travelling hordes, looked dangerous every time they journeyed into the Wimbledon half.
Tzanev pulled off a miraculous save from point-blank range to keep out a Doyle volley when Afolyan had put the ball into the mixer from the left after he was picked out by Antoni Sarcevic following good work inside the box.
The hosts were awarded a penalty of their own on 72 minutes which was duly converted by substitute Aaron Pressley.
Evatt made his first change immediately after the goal when he brought on George Johnston for Declan John.
But the hosts were back on terms straight away through fellow substitute Dapo Mebude who curled in a right-footer beyond Dixon.
Wanderers made a double change with 13 minutes of the game remaining when Lloyd Isgrove and Elias Kachunga came on for Afolayan and Bakayoko.
The game ended all square with the same scoreline as last Saturday’s opening day draw.
AFC Wimbledon: Tzanev, Alexander, Heneghan, Nightingale, Guinness-Walker, Woodyard, Hartigan, McCormick, Rudoni, Assal, Palmer.
Unused Subs: Oualah, Kalambayi, Marsh, Chislett.
Goals: Nightingale (20), Pressley pen (74), Mebude (75).
Bolton Wanderers: Dixon, Jones, Almeida Santos, Baptiste, John, Williams, Sheehan, Sarcevic, Bakayoko, Afolayan, Doyle.
Unused Subs: Gilks, Brockbank, Lee, Thomason.
Goals: Doyle pen (23), Sheehan (27), Afolayan (48)

Ticket information for the Wanderers’ Sky Bet League One fixture, away to AFC Wimbledon, on Saturday 14 August 3:00pm, has been confirmed.

Bolton Wanderers have received an allocation of 1,400 tickets for the upcoming Sky Bet League One fixture at Plough Lane.

Tickets will remain on sale until 3pm on Wednesday 11 August, subject to selling out.

All tickets purchased will be posted out 1st Class by close of business on Wednesday 11 August.

Refunds and duplicate ticket requests, should tickets not arrive in time, will be accepted until 4pm on Friday 13 August.

Official coach travel is also available, costing £32.00 per person. All coaches depart from the University Of Bolton Stadium at 7:30am. 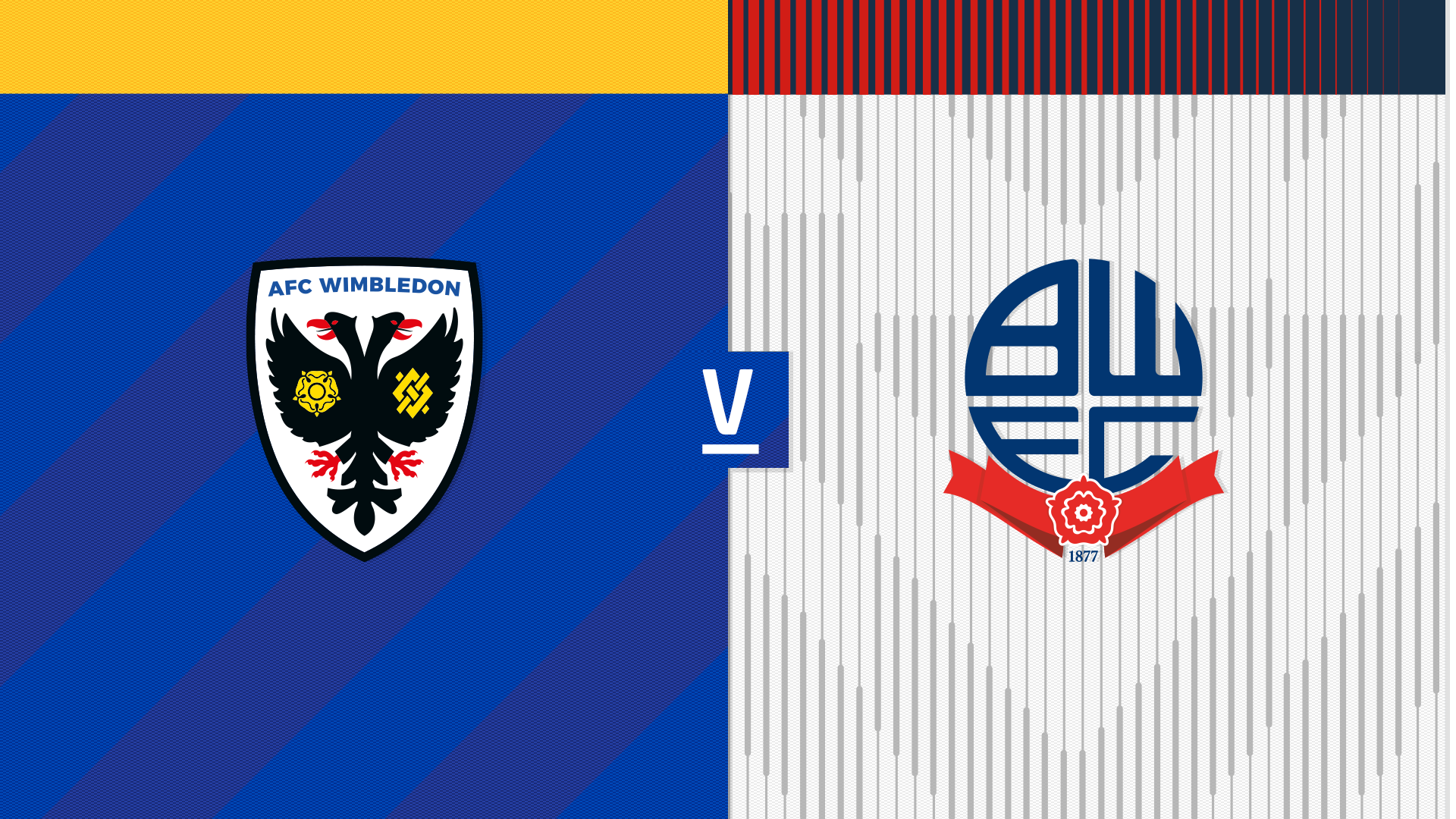 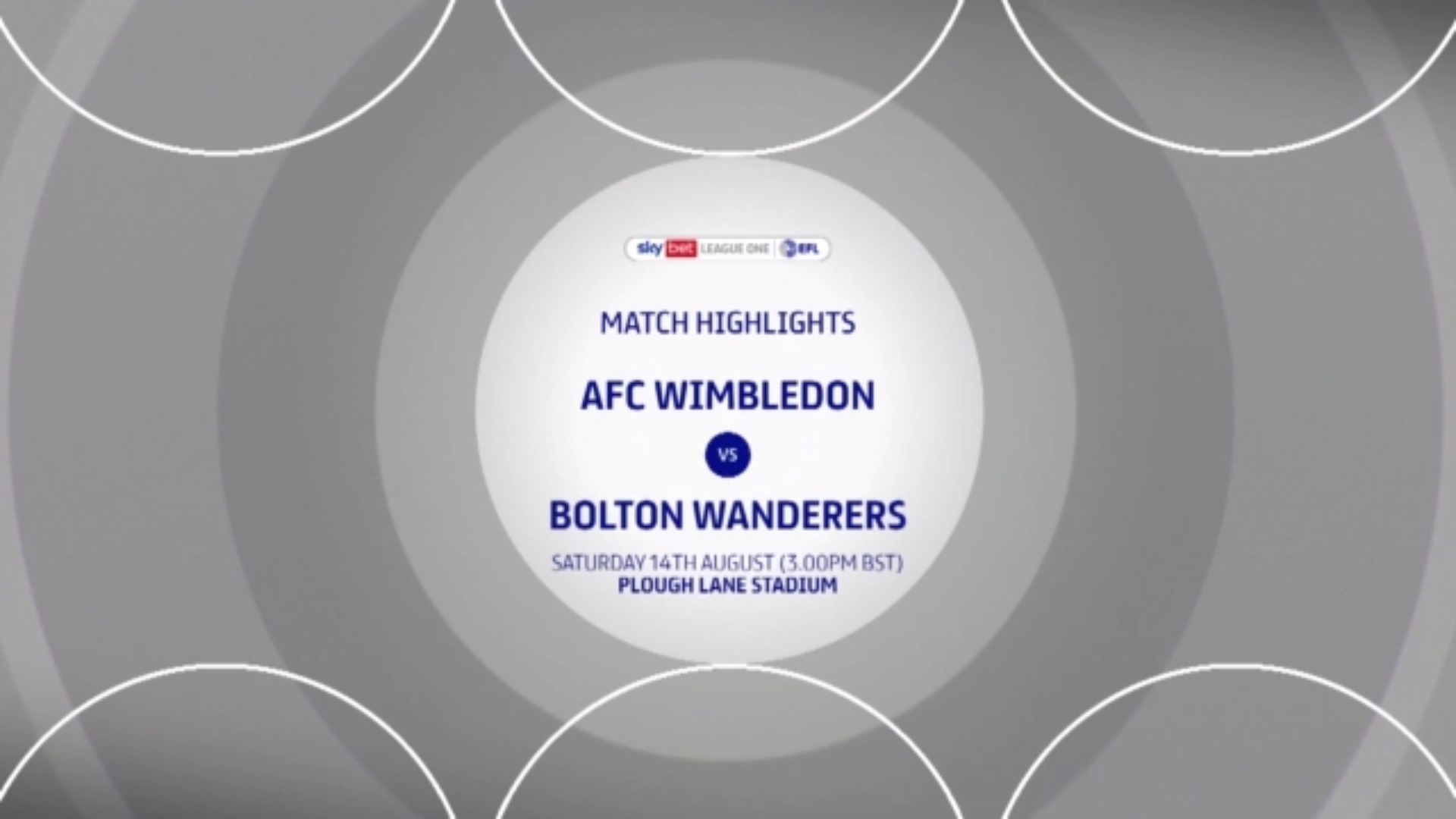 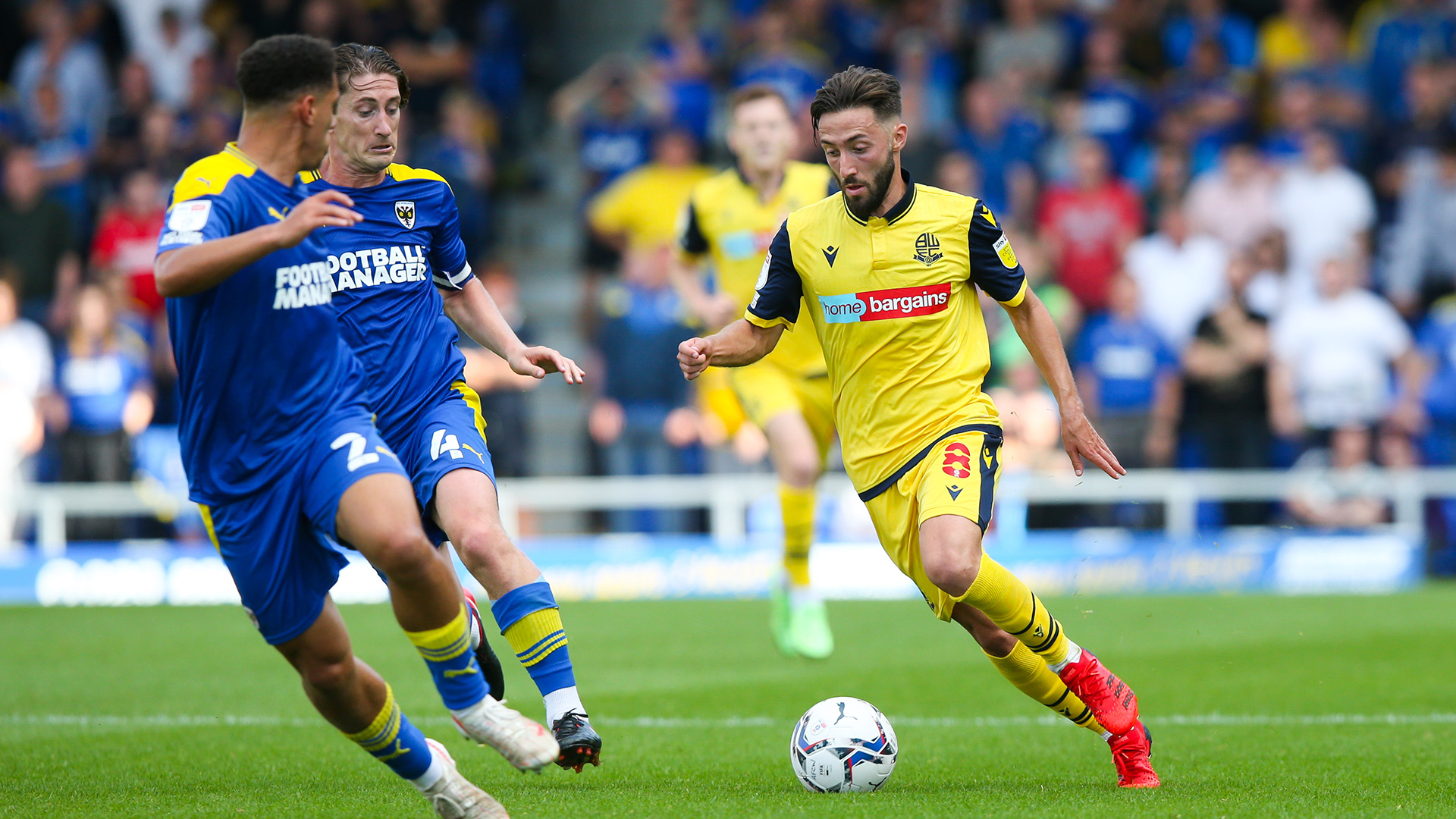