Wanderers make the short trip to the DW Stadium to take on fellow Sky Bet League One outfit Wigan Athletic in the Second Round of the Carabao Cup this Tuesday evening.

Both Wanderers and the Latics have enjoyed productive starts to the 2021/22 campaign. Wigan haven’t lost since the opening day of the campaign, and Bolton are yet to be beaten with two wins and two draws from the opening four league matches.

Ian Evatt’s men earned their passage through to the Second Round of the Carabao Cup with a penalty shoot-out victory against Barnsley at the University of Bolton Stadium following a goalless draw. Wigan also took a Sky Bet Championship scalp, defeating Hull City on penalties in the First Round following a 1-1 draw at the MKM Stadium.

Ian Evatt: “The fixture list doesn’t get any easier for us at the moment, but we’re looking forward to the game, and we think it’s a good chance for us to progress to the next round. I hear clichés about trying to take emotions out of local derbies – you can’t do that. We have to play with emotion and show that we care – which we will, but we will also concentrate on our job and implementing our game plan. If we do that, then I think we can get the right result.”

Leam Richardson: “It’s two fantastic football clubs – I’ve been very fortunate to experience both in playing for one and managing the other one. There are some fantastic people at both clubs and it’ll be a fantastic spectacle for both sets of supporters.”

Team news is a difficult one to predict for this evening’s trip to the DW Stadium, but Amadou Bakayoko will miss out through injury. Will Aimson is stepping up his recovery, but he won’t be involved this evening.

Changes may or may not be made from Saturday’s win against Oxford United, but Ian Evatt said in his pre-match press conference that he’ll be picking a team he feels is capable of winning the game.

Tickets for tonight’s game have sold out. Wanderers will be backed by a full allocation of 4,700 supporters at the DW Stadium this evening. Thank you for your following support.

Those travelling by train should be made aware that at the behest of the Greater Manchester Police, supporters are advised to arrive at Wigan Wallgate station as early as possible for the 22:50 service heading back to Bolton. This will be the final train of the service this evening.

Please note, there will be no alcohol being served within the stadium.

Cashless at the DW Stadium.

The DW Stadium is now a card-only stadium. The only thing you can purchase with cash is the matchday programme.

It was an afternoon to forget for Wanderers as they headed towards relegation from the Sky Bet Championship with a heavy defeat at the hands of fellow strugglers, Wigan Athletic. Joe Garner gave the Latics an early lead with Gavin Massey and Nick Powell striking just after the break to leave Phil Parkinson’s men with a mountain to climb.

Gary O’Neil scored to get Bolton on the scoresheet, but Michael Jacobs rifled a shot into the top corner to restore Wigan’s three-goal advantage. Sammy Ameobi was the next to score for Bolton, before Leon Clarke added a fifth for the home side.

Bolton Wanderers bowed out of the Carabao Cup after losing 5-4 on penalties against Wigan Athletic at the DW Stadium.

After a scoreless 90 minutes, a tense shootout occurred with Nathan Delfouneso the unfortunate player to put his decisive penalty wide in sudden death.
Ian Evatt made eight changes from the side that beat Oxford United at the weekend as they made the short journey to neighbours Wigan Athletic.
Matt Gilks, Nathan Delfouneso, Kieran Lee, Harry Brockbank, Elias Kachunga, George Thomason, Alex Baptiste and Liam Gordon were handed starts.
From the off, the travelling hordes of Wanderers fans were in fine voice behind the goal the Wanderers attacked in the opening 45 minutes.
The game started at a frenetic pace, buoyed by the ferocious atmosphere.
Gavin Massey’s header from Tom Pearce’s cross went straight into the arms of Matt Gilks.
Wanderers won a free-kick after Elias Kachunga was brought down 20 yards from goal. Josh Sheehan’s free-kick took a deflection for a corner as the Wanderers contingent momentarily held their breath.
The visitors were looking more comfortable and dangerous with the ball, passing the ball around with confidence.
A rare break by the hosts saw Gwion Edwards fire a shot well wide of the target.
Wanderers lost possession just outside their own box with the ball finding its way to Stephen Humphrys whose shot was parried away by Gilks with the rebound cannoning off a Latics player for a goal kick.
Humphrys struck the ball well wide as Wigan carved open another scoring opportunity.
Wanderers had their best chance of the game just after the half-hour mark when the ball broke down the right with Nathan Delfouneso delivering a cross that fell to Dapo Afolayan. The wideman opted for power and hit the ball over Jamie Jones’ bar.
Scott Smith was shown the first yellow after taking down Delfouneso who’d tricked his way past him after running into the channel to pick up George Thomason's weighted pass.
The Latics captain Tendayi Darikwa also had his name taken by the referee shortly afterwards for a foul on Afolayan.
On his return to the DW Stadium, Johnston slid in to make an important challenge to clear away Max Power’s dangerous-looking cross into the box.
James McClean was cautioned for a challenge from behind on Afolayan and Power was then carded for dissent after protesting the foul and confronting Afolayan.
Things were getting a little heated as the half drew to a close.
From the resulting free-kick, Josh Sheehan’s set-piece was headed away by the Wigan wall.
Kachunga was cautioned for throwing the ball away after being harshly penalised for a foul.
No changes were made by either side during the break.
Gilks got down to gather a weak shot from McClean after a quickly taken free-kick was played into his path. He cut onto his weaker right-hand side and the ball trickled into the Wanderers’ keeper’s hands.
Tom Pearce was the latest player to be cautioned after he fouled Kachunga on the edge of the box. Sheehan’s resulting set-piece evaded everybody and went out for a throw-in on the far side.
Evatt made his first change in the 65th minute when he brought on Eoin Doyle for Kachunga while three minutes later, Antoni Sarcevic replaced George Thomason.
Wanderers final change came with twenty minutes remaining as Jones came on for Brockbank.
Afolayan was cautioned for a foul on Thelo Aasgaard on the edge of the box, which McLean curled straight into the arms of Gilks.
A great lay-off by Jones freed up the substitute who charged down the right and had a shot on goal, but Jones somehow got a hand to the Welshman’s effort and it was eventually cleared.
Wanderers were rallying as the game was heading towards its end and they worked the ball over to Afolayan on the far side, who cut in but shot straight at Jones.
Gilks got down well to keep out substitute Thelo Aasgaard’s low shot after the sub was allowed to run into danger.
Kieran Lee was cautioned for dragging down Aaasgaard as the dangerman looked to set off on a probing run.
Deep into injury time, Alex Baptiste got on the end of Sheehan’s free-kick but his header went into the arms of Jones.
With the tie ending goalless after 90 minutes, the game went straight into a penalty shoot-out.
Penalty 1 - Power scored. 1-0
Penalty 2 - Doyle scored  1-1
Penalty 3 - Aasgaard scored 2-1
Penalty 4 - Sarcevic scored 2-2
Penalty 5 - Jones missed 2-2
Penalty 6 - Lee missed 2-2
Penalty 7 - Naylor scored 3-2
Penalty 8 - Afolayan scored 3-3
Penalty 9 - Humphrys scored 4-3
Penalty 10 - Sheehan scored 4-4
Penalty 11 - Jamie Jones scored 5-4
Penalty 12 - Delfouneso missed 5-4
Wigan Athletic: Jones, Darikwa (Aasgaard 70), Naylor, Watts, Pearce, Smith, Power, Massey, Edwards (Lang 66), McClean (Jones 86), Humphrys
Subs Not Used: Amos, Lloyd, Long, Robinson.
Bolton Wanderers: Gilks, Brockbank, Baptiste, Johnston, Gordon, Lee, Thomason, Sheehan, Afolayan, Delfouneso, Kachunga.
Subs Not Used: Dixon, Almeida Santos, John, Tutte.

Our Carabao Cup Second Round clash against Wigan Athletic on Tuesday 24 August, 7:45pm kick-off, has now sold out.

Our initial 4,000 ticket allocation for the trip to the DW Stadium has now officially sold out.

A second allocation of 700 tickets for this fixture will now go on online open sale later this afternoon. The time for this will be communicated later today.

Official bus travel is also available, costing £7.00 per person. All buses depart from the University Of Bolton Stadium at 5:45pm. 
Ticket information for the Wanderers’ Carabao Cup Round Two fixture, away to Wigan Athletic, on Tuesday 24 August 7:45pm, has been confirmed. 
Wanderers’ Carabao Cup second round tie against Wigan Athletic at the DW Stadium will take place on Tuesday 24 August (kick off 7.45pm). 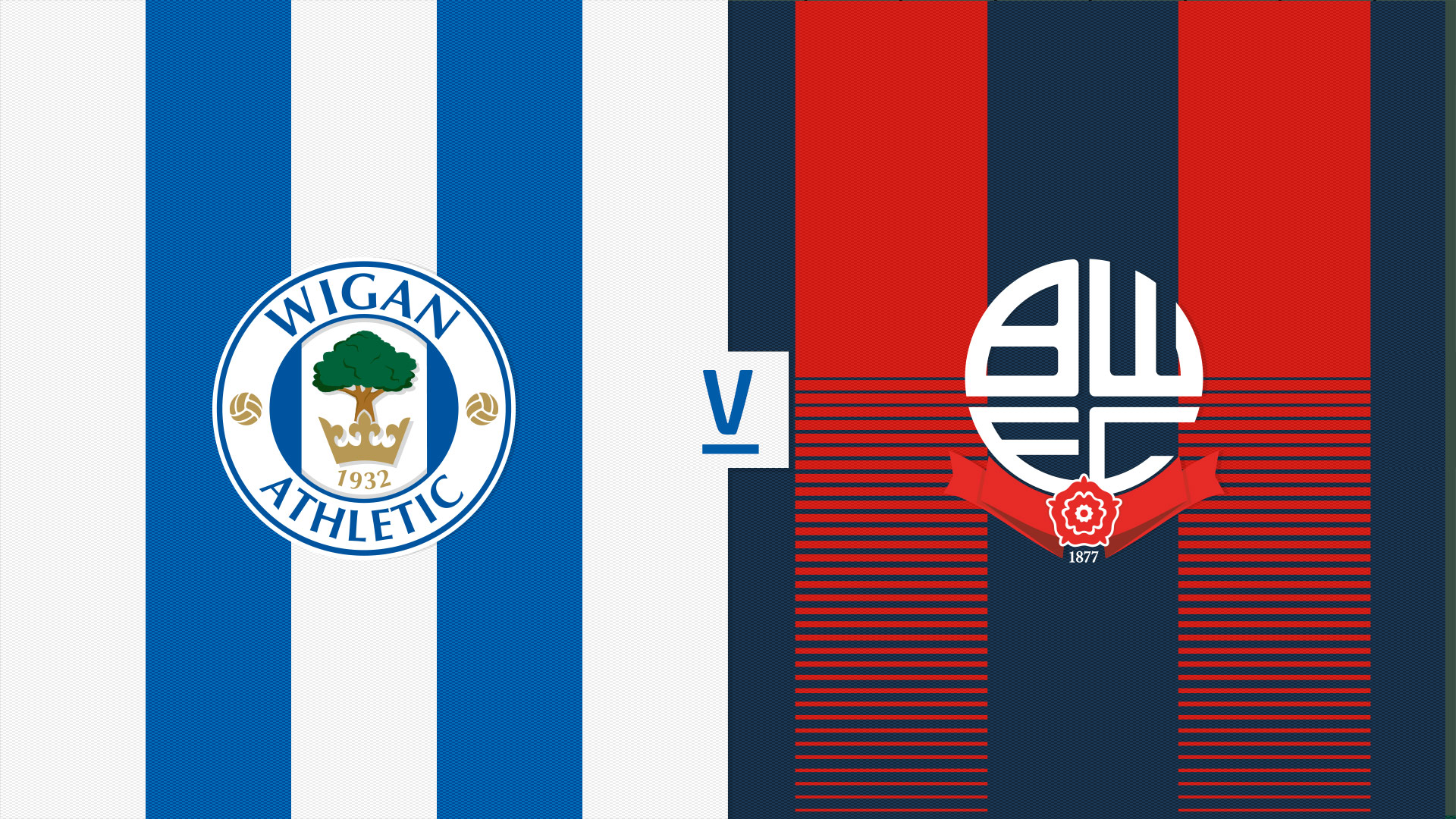 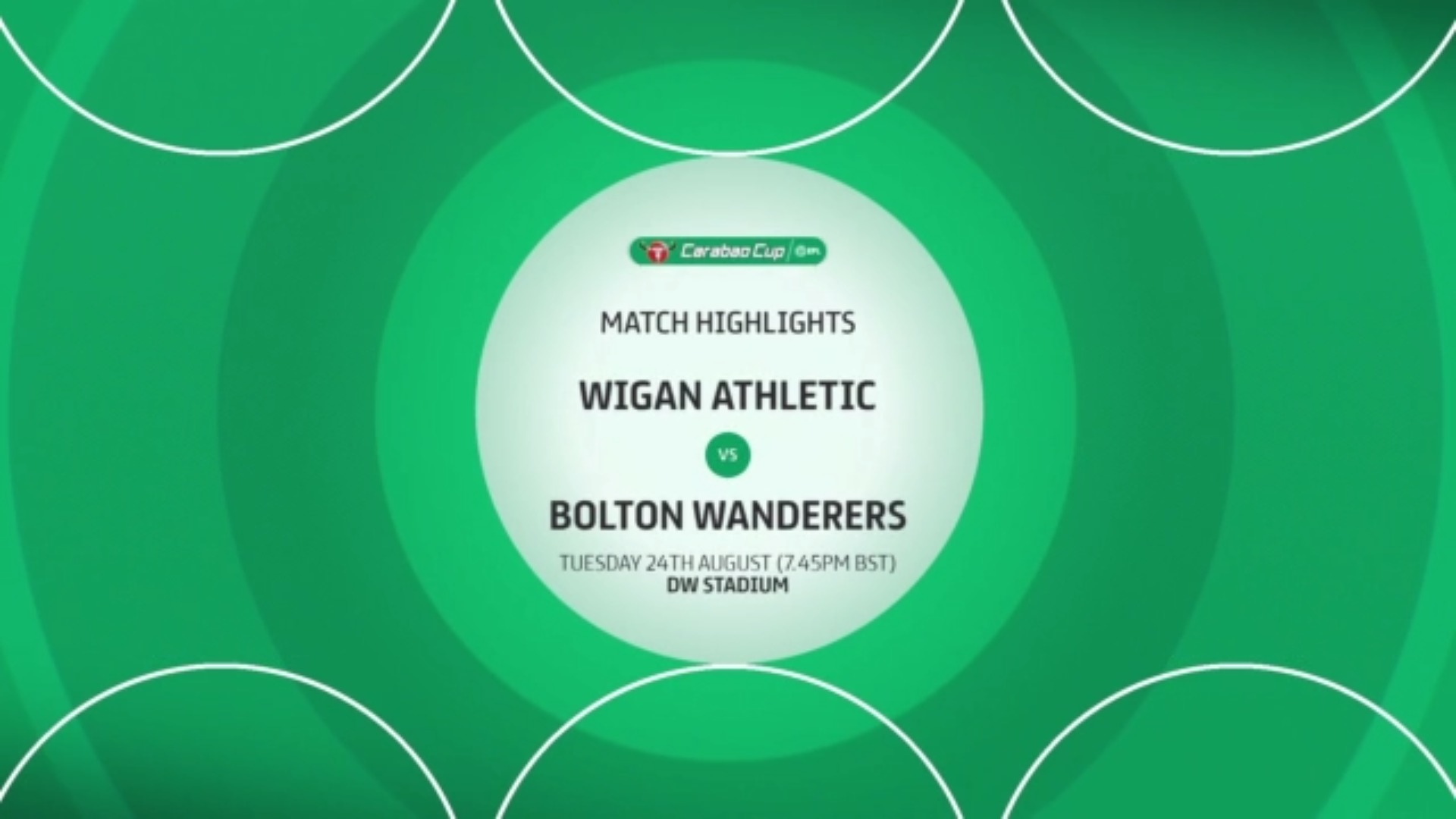 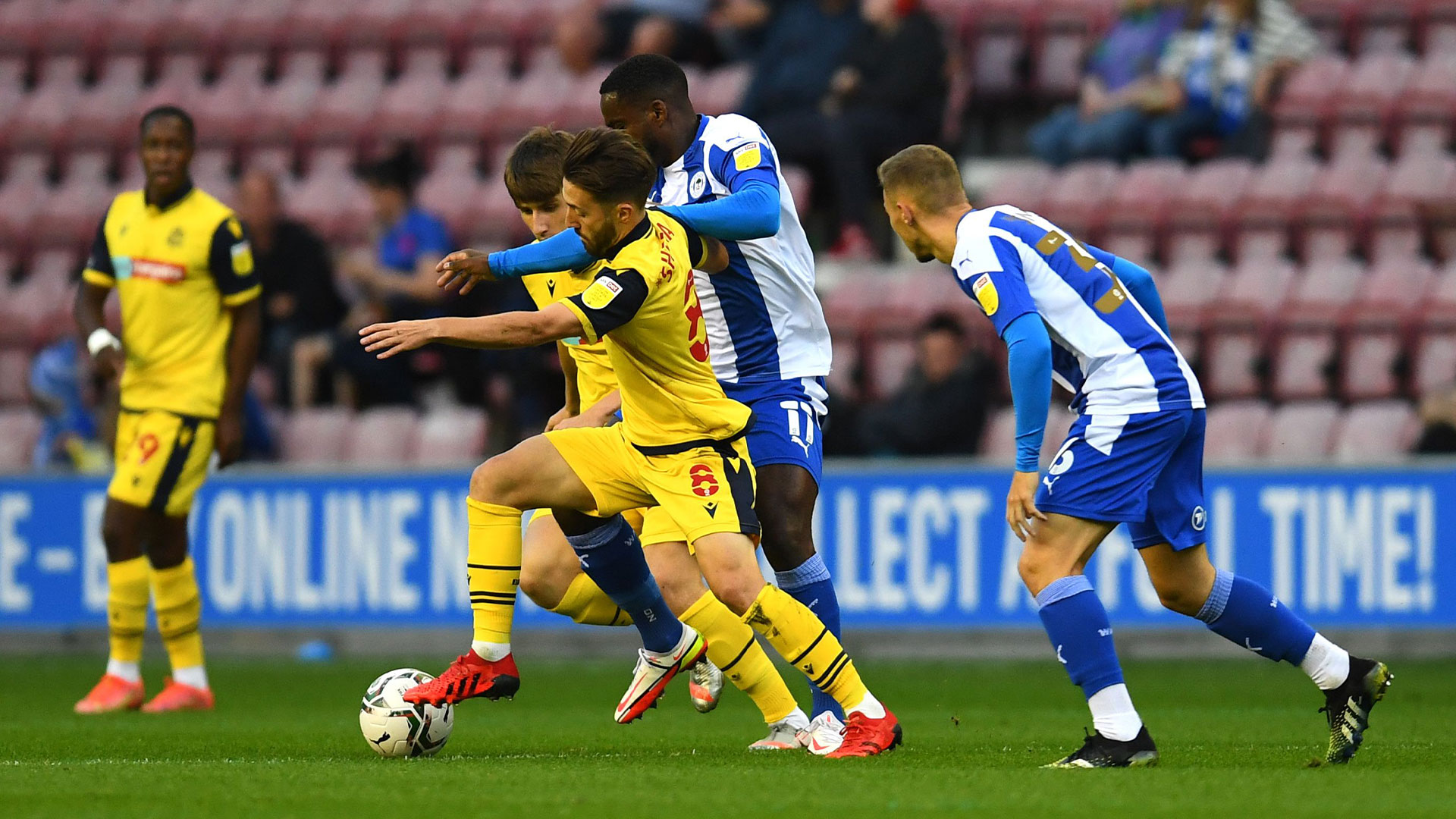