Wanderers are back on their travels for another big game at promotion hopefuls MK Dons.

Back-to-back home wins have kept the Whites on the fringe of the play-off race as one of the form teams of the division.

Ian Evatt’s men could get within a couple of points of the top six with a sixth away win of the season - and sixth win of a fanatstic February - depending on results elsewhere.

The Dons, meanwhile, will be looking to stay up with the pace near the top and could potentially move level on points with second-placed Wigan, who entertain sixth-placed Sunderland on another potentially pivotal day in League One. Ian Evatt: “I think it’s going to be a really good game. I’ve watched a fair bit of them the last couple of days and they are a good team, a dangerous team.

“I love the way they play and what they’re trying to do. But we have some threats and weapons on our team as well, so I’m excited for the challenge.

“It’s two teams in top form at the moment and something’s got to give. Hopefully we can maintain our good winning form.”

MK Dons head coach Liam Manning: “I am excited about tomorrow’s game - two in-form teams that are ready to go head to head.

"(Bolton) are a really good side. They have real good energy and a good blend of style. They move the ball really well but they're not afraid to go long. I’ve enjoyed watching them. Wanderers will have captain Ricardo Almeida Santos back after he missed the mid-week win over Lincoln City due to the birth of his second child.

Wing-back Declan John is also expected to be fit following a back spasm which forced him off at half-time against the Dons.

MK are without Scotland U21 international Daniel Harvie due to suspension and defender Aden Baldwin remains sidelined.

Wanderers’ fans can buy tickets on the day at Stadium:MK. Details HERE

Wanderers have won eight of their last 10 games to move into play-off contention.

Defeat in their last away game at Burton ended a three-game game unbeaten away record on the road.

But no side in the division has collected more points in their last 10 games than the Whites and 25 goals during that run is the most scored.

MK Dons are unbeaten in their last seven games to sit just outside the automatic promotion places.

However, they have won just two of their last seven home fixtures. Wanderers kicked off life back in League One with a dramatic draw on the opening day of the season.

And defender Alex Baptiste was the Whites’ unlikely hero with a last-gasp equaliser.

Wanderers trailed in an entertaining game before Josh Sheehan curled in a superb free-kick to level.

Summer signing Amadou Bakayoko then fired Ian Evatt’s men ahead on his debut but the Dons hit back to lead 3-2 going into injury time.

Wanderers refused to lie down, though, and Baptiste popped to ram home an equaliser with the defender’s first goal of the club and first since January, 2014.

Wanderers’ surge towards the play-off places was slowed as they suffered only a second defeat in 11 games at the hands of promotion-chasing MK Dons.

Ian Evatt’s men drew a blank in front of goal for the first time since starting their winning run in mid-January.

And as the rigours of a heavy recent workload possibly took their toll, the Dons cashed in with a goal in each half to move level on points with second-placed Wigan.

Wanderers more than matched the home side for long periods of an attritional contest between two in-form sides seeking not to give an inch.

But, for once, the Whites struggled to find top gear and a cutting edge and despite the promise of a second-half fightback were finally sunk by Scott Twine’s goal 16 minutes from the end. Wanderers welcomed back captain Ricardo Santos and also brought Kyle Dempsey and in-form frontman Amadou Bakayoko back into their starting line-up as they aimed to end a terrific month on another high.

Five wins in February had continued the Whites’ climb up the table but in MK Dons they faced a side with just one defeat in their previous 13 league games and eyeing an automatic promotion spot.

And the Dons started like a side still harbouring top-two ambitions as they didn’t allow Wanderers to settle and threatened to take an early lead.

It took a superb block from George Johnston to deny on-loan Aston Villa youngster Kaine Kesler Hayden and Twine then hit the inside of a post – possibly via a vital touch from James Trafford.

Trafford then did his best to keep the hosts out again but despite an excellent double save he was beaten as the Dons made it 1-0 after 16 minutes. The on-loan keeper kept out Harry Darling’s swerving long-range effort and the initial follow-up from Mo Eisa but the striker – who looked to have used his arm to control the ball – was able to score at the second attempt as he slotted home.

Wanderers struggled to find an initial response but finished the first half strongly and were only inches away from levelling through Bakayoko.

Again there looked to be a possible case for handball when Declan John headed a Gethin Jones’ cross against the raised arm of a defender.

Evatt replaced Aaron Morley with Dapo Afolayan at the start of the second half – with the impressive Dempsey dropping into a deeper role – as Wanderers looked to maintain their momentum and find a route back into the game.

And most of the attacking came from the Whites in front of an away end containing more than 2,000 travelling fans.

Marlon Fossey and Gethin Jones both got behind the Dons’ defence to deliver balls that just needed a decisive touch in front of goal before Santos headed another John corner over the top.

Evatt then sent on Jon Dadi Bodvarsson and Kieran Sadlier to try and force the breakthrough but neither had the chance to make an impression before the Dons were handed a second goal to double their lead.

Trafford’s attempted pass out reached only Kesler Hayden and he was allowed to advance into the penalty area before picking out Twine to fire home and leave Wanderers to look forward to a blank mid-week and re-group for a renewed push over their final 11 games.

Bolton Wanderers supporters will be able to purchase tickets at Stadium: MK on Saturday afternoon, ahead of the Wanderers' 3pm Sky Bet League One clash against Milton Keynes Dons.

Tickets will be sold from the Away Sales Booth at Gate 3. Supporters will be able to pay via debit/credit card or cash. Ticket prices do not increase on the day.

Advanced sales from Bolton Wanderers are still available via the phone lines, for collection from Bolton Central, until 3pm ton Friday 25th February. After this time, no sales or refunds can be processed.

Under 12s: free of charge (must be with a full paying adult) Ticket Information For MK Dons Away


Ticket information for the Wanderers’ Sky Bet League One fixture, away to Milton Keynes Dons on Saturday 26 February 2022 at 3:00pm, has been confirmed. 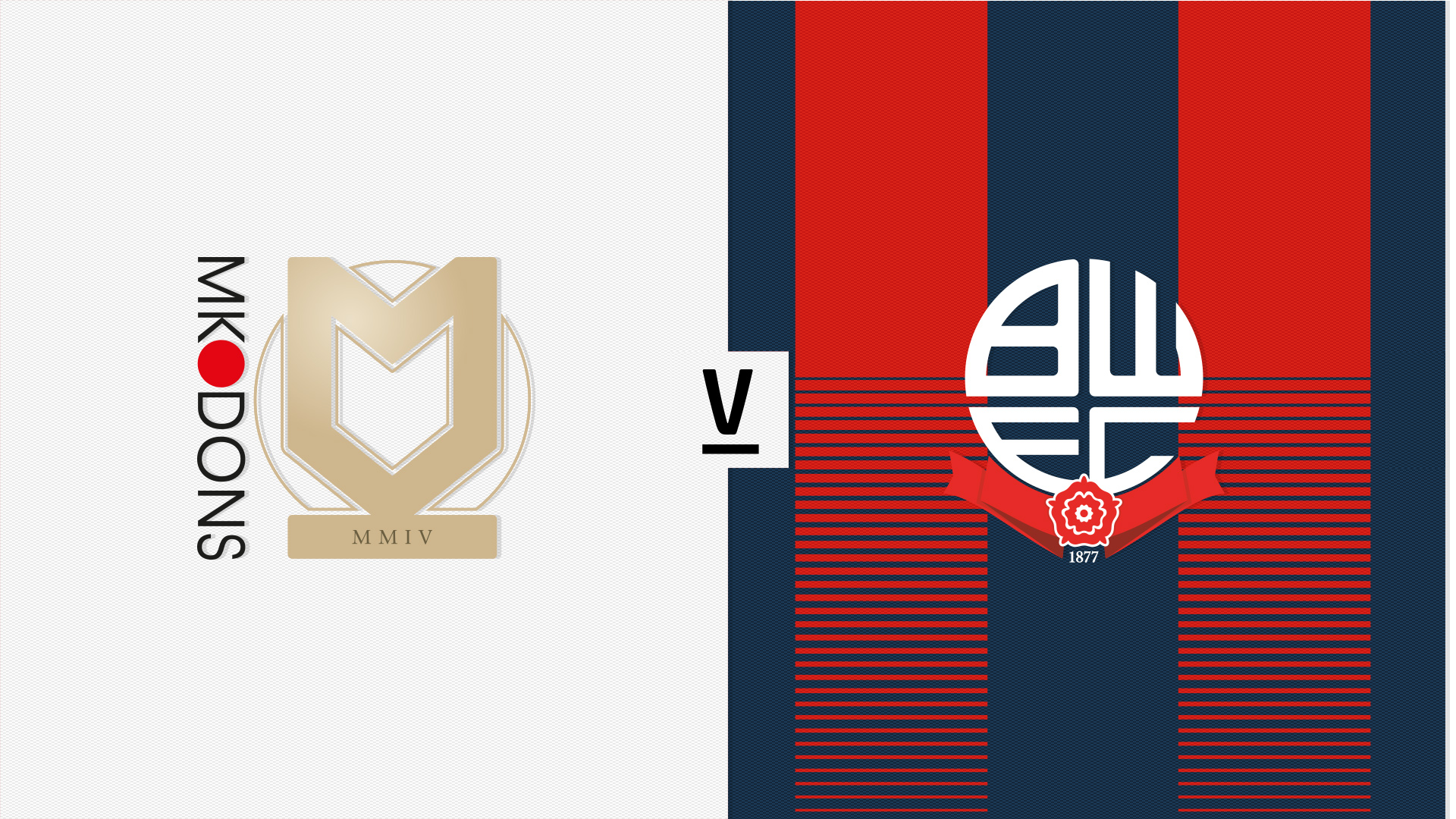 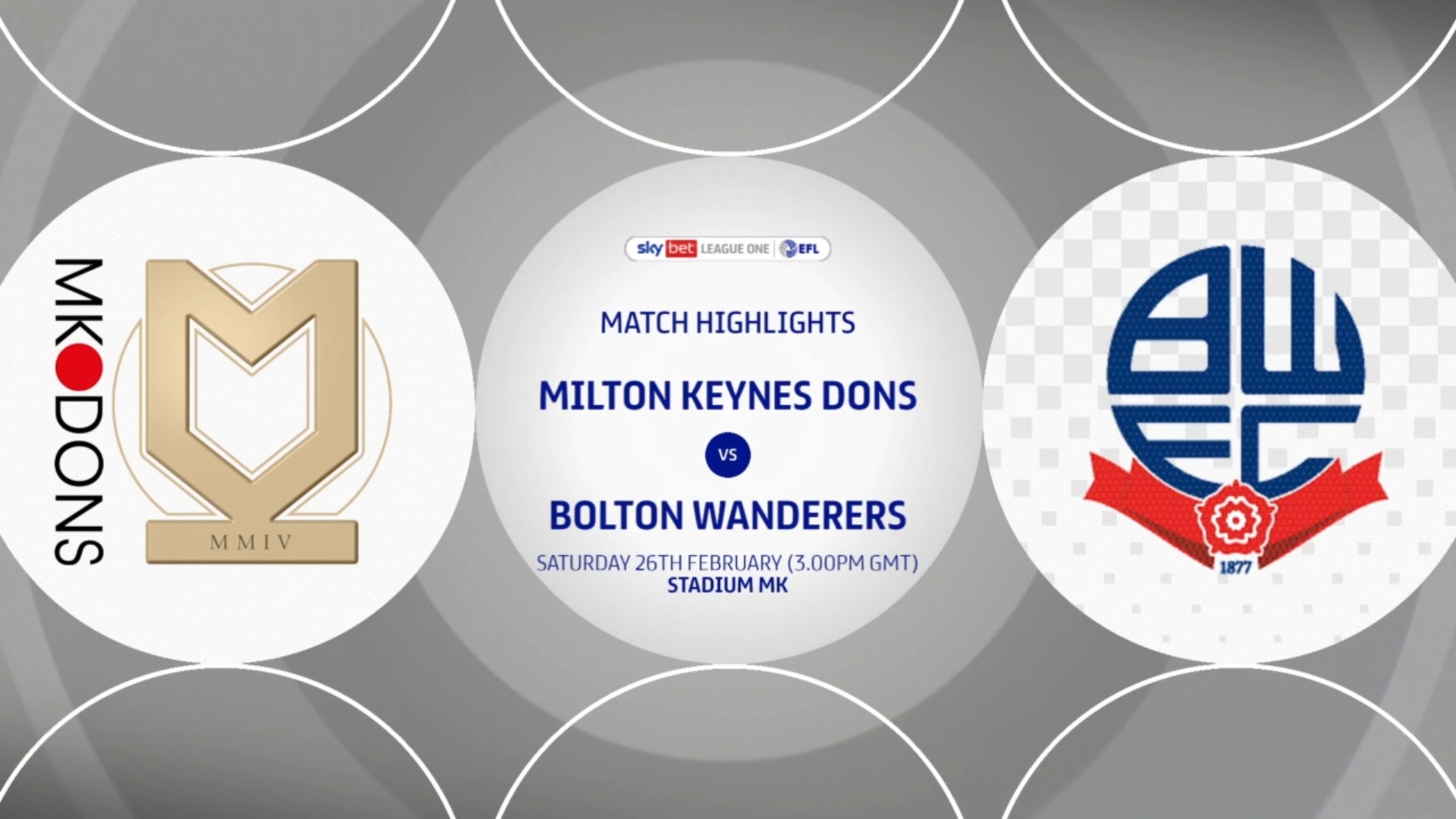 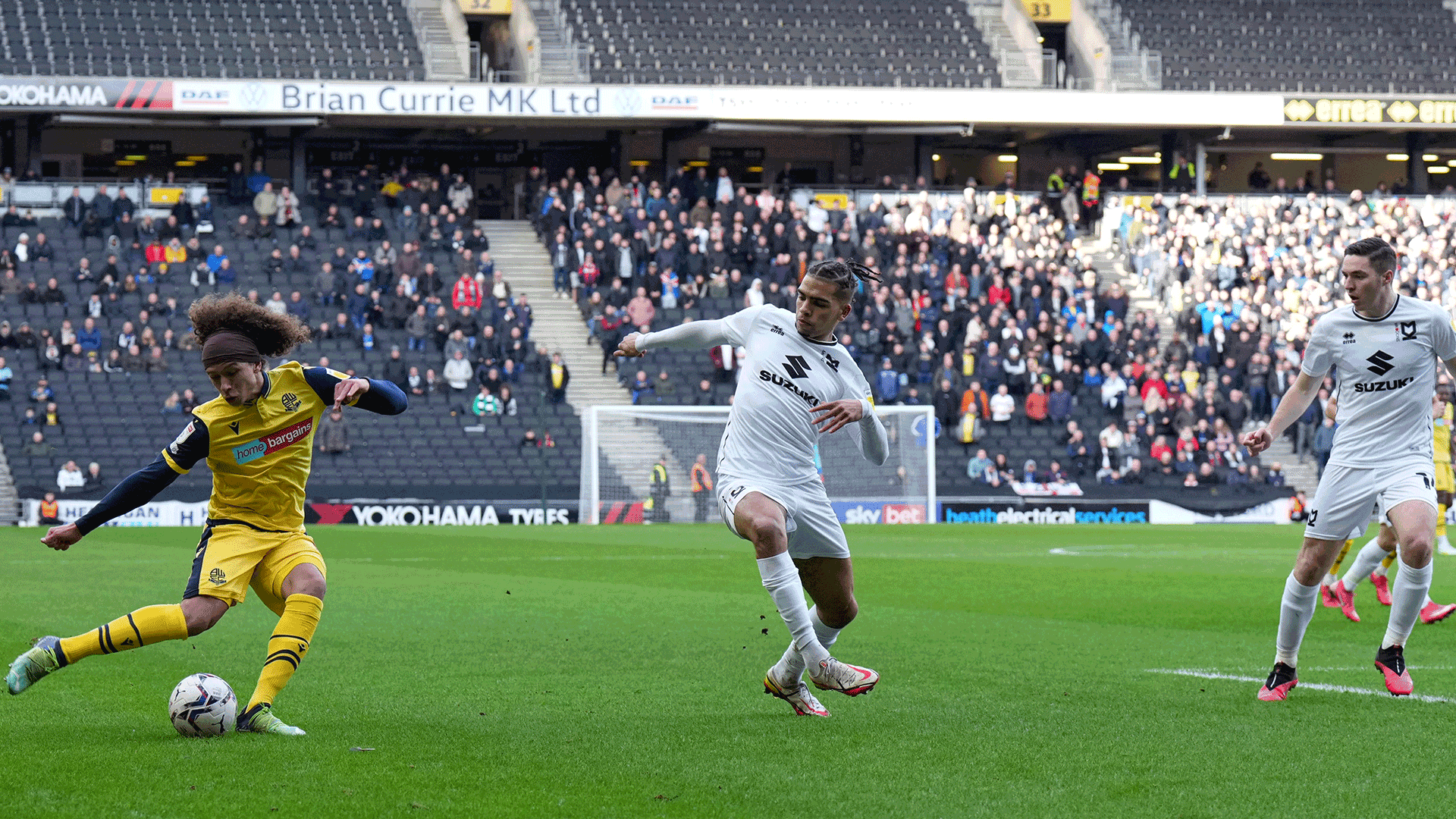